[youtube]http://www.youtube.com/watch?v=b_zAAPLEWFQ[/youtube]
The Normandy coast (also known as the Alabaster Coast) in northern France is famous for its dramatic coastal cliffs but authorities are warning people not to get too close. The advice comes after an estimated 30,000 tonnes of rock split from the cliff near the city of Le Havre and plunged towards the beach below.
Uploaded on July 17, 2013 by tphotogrammetry

“This sequence of still photographs were captured just as a cliff section was collpasing on the beach of St Jouin Bruneval in Normandy (49.63907°N, 0.1490°E). My colleague, Pierre Pannet from the BRGM (French Geological Survey) office of Normandy had just been called in by the Maire of the district as a collapse had occurred the day before. When he got onto the beach, a new cliff section collapsed in front of his camera.

At this location, the cliff is made of something like 50m of chalk resting on the Gault clay horizon. This clay unit is weak and impermeable. It must have kept a perched water table weakening the base of the chalk face. Rains have been particularly heavy in the last 12 months, though on July 15 the weather was fair and sunny. Note that the tide was just starting to rise again. Neither the rain nor the sea beating the base of the cliff can be considered as the direct cause of collapse. It is more likely that it is the slow flow of saturated clay that has initiated the rupture and a sudden acceleration of that slow slip that caused the chalk “towers” to collapse. 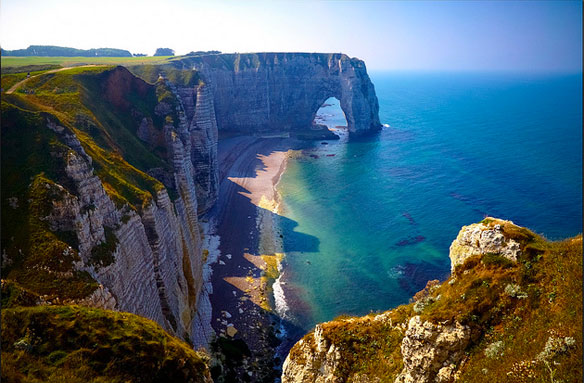 The Manneporte clay arch and cliff, 6km from St Jouin Bruneval. View from Etretat’s Porte d’Aval Cliff.
The Côte d’Albâtre, the Alabaster Coast, is part of the French coast of the English Channel, corresponding to the coastline of Pays de Caux, and forming almost all of the coastline of Seine-Maritime, Normandy. The Alabaster Coast, has been named after its remarkable yet fragile dramatic looking clay cliffs. Since 2009 it has been classified as a Natura 2000 site. Photo source: ©© Moyan Brenn

Looking at the detail of the collapse, two towers of chalk collapsed head first.

Their back has detached as thick wedges. Such motion indicates that the cliff foot had lost all resistance up to a depth behind the center of equilibrium of both towers. The towers fracture mid-way through their fall before hitting the ground. Then blocks bounced off the ground reaching further out. The final scree apron reaches a probable elevation of 25m (to be confirmed), with a regular slope and the outflow may be something of the order of 50 to 100m out to sea.” 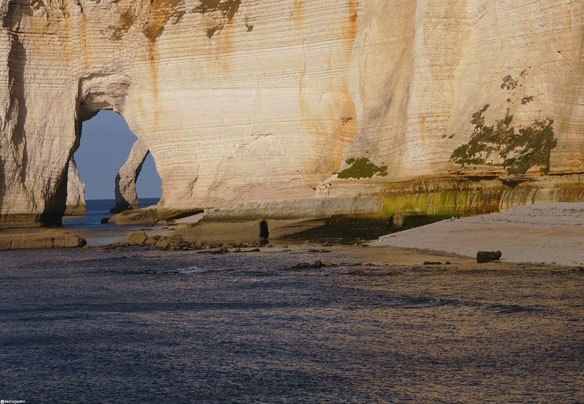 Cliff Collapses onto the Beach, Video