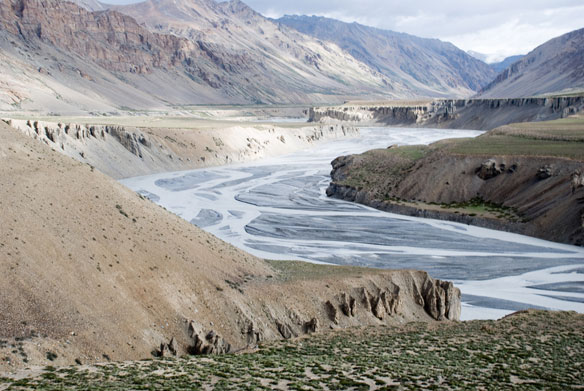 Himalayas to Become The Most Dammed Region In The World 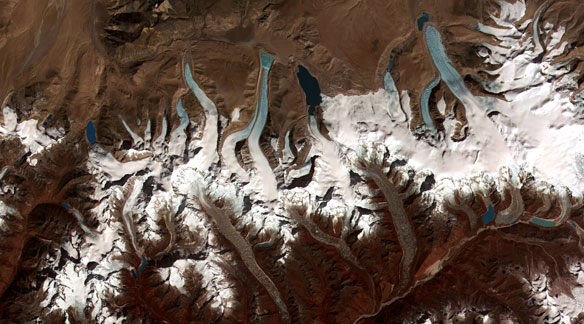 According to a joint press release issued by NASA and the U.S. Geological Survey, the great majority of the world’s glaciers appear to be declining at rates equal to or greater than long-established trends. This image from the ASTER (Advanced Spaceborne Thermal Emission and Reflection Radiometer) instrument aboard NASA’s Terra satellite shows the termini of the glaciers in the Bhutan-Himalaya. Glacial lakes have been rapidly forming on the surface of the debris-covered glaciers in this region during the last few decades. According to Jeffrey Kargel, a USGS scientist, glaciers in the Himalaya are wasting at alarming and accelerating rates, as indicated by comparisons of satellite and historic data, and as shown by the widespread, rapid growth of lakes on the glacier surfaces. Captions and Photo source: NASA

Most of the Himalayan rivers have been relatively untouched by dams near their sources. Now the two great Asian powers, India and China, are rushing to harness them.

The result, over the next 20 years, “could be that the Himalayas become the most dammed region in the world”…

Mountains of Concrete: Dam Building in the Himalayas, International Rivers
There will always be abundant snow and glaciers on the highest mountains of the world, the Himalayas. This snow will always feed the Indus and Ganges rivers and forever supply water to millions of people in South Asia and China. These statements may no longer be true. Our warming climate is changing the Himalayas faster than any other region of the world. The mountains’ mighty glaciers, the source of most large Asian rivers, are melting. Against these dramatic changes, the governments of India, Pakistan, Nepal and Bhutan are planning to transform the Himalayan rivers into the powerhouse of South Asia. They want to build hundreds of mega-dams to generate electricity from the wild waters of the Himalayas…

Are Humans Responsible for the Himalayan Tsunami? IPS News

The dried up Yunam river at Sarchu. Captions and Photo source: ©© Jace