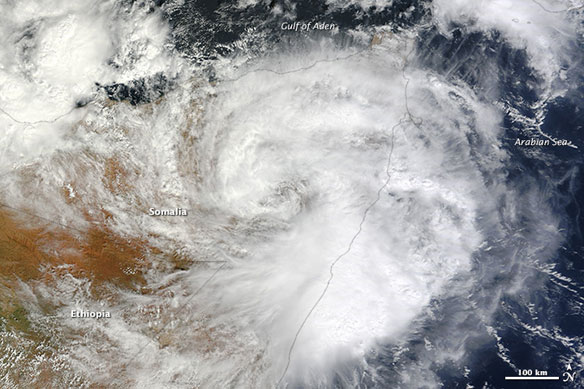 Even as the devastating impact of Typhoon Haiyan began to emerge in the Philippines, Somalia too experienced one of the deadliest tropical cyclones in its history. Tropical Cyclone 3A moved over Puntland, Somalia, on November 10–11, 2013, causing flash floods that left more than 100 dead. The storm destroyed hundreds of homes and thousands of livestock, according to news reports.

The Moderate Resolution Imaging Spectroradiometer (MODIS) on NASA’s Terra satellite acquired this image of the cyclone on November 11, 2013, well after the storm came ashore. At its strongest, Tropical Cyclone 3A had winds of 74 kilometers (46 miles) per hour, making it the equivalent of a weak tropical storm.

As the storm moved ashore, it was forecast to dump 100-200 millimeters (4-8 inches) of rain, with potentially higher amounts in some regions. The average annual rainfall in Puntland ranges from less than 100 mm (4 inches) to 200 mm (8 inches).

Cyclones are unusual in Somalia. Tropical Cyclone 3A is just the fifth storm to strike the country since records began in 1966, wrote meteorologist Jeff Masters. The last cyclone to come ashore over Somalia was Tropical Cyclone Murjan on October 25, 2012.

Somalia’s Cyclone-Hit Puntland Declared A Disaster area, BBC News
The cyclone had swept through the Eyl, Beyla, Dangorayo and Hafun districts along the eastern coast and across to Alula at the tip of the Horn of Africa…

Deadly, Rare Tropical Cyclone Hits Somalia, LiveScience
Weak storms such as Cyclone 3A can wreak havoc along the arid African coast because they trigger flash floods. Only one or two tropical cyclones strike Somalia every decade, but records only go back for about 30 years. However, the intensity of storms in the Arabian Sea appears to be increasing due to aerosol pollution…