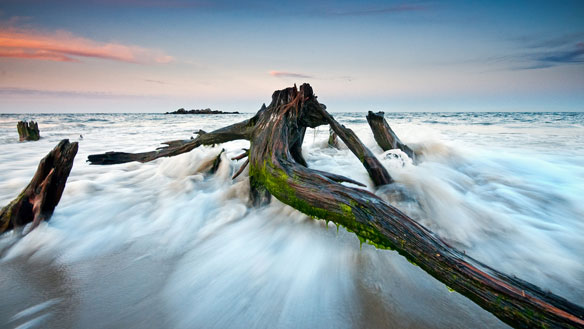 Communities and coastal habitats in the southern Chesapeake Bay region face increased flooding because, as seawater levels are rising in the bay, the land surface is also sinking. A new USGS report released today concludes that intensive groundwater withdrawals are a major cause of the sinking land, or ‘land subsidence’, that contributes to flooding risks in the region.

“From a practical viewpoint, sea level is relative to the land surface,” said Jerad Bales, Acting Associate Director for Water at USGS. “Whether the water is rising or the land is sinking, or both, the effect is the same: greater vulnerability to coastal storms and loss of important coastal habitat, both of which result in economic losses.”

The new study presents a variety of data and findings from previous studies to examine land subsidence in the southern Chesapeake Bay region.

While there are several factors influencing land subsidence, aquifer system compaction, caused by extensive groundwater pumping in the Virginia Coastal Plain, is a major cause in the Norfolk area. Land subsidence has occurred around Norfolk at an average rate of 3 mm/year since 1940.

Low-lying communities and critical habitats in the Chesapeake Bay region are especially vulnerable to damage from the relative sea-level rise caused by land subsidence. Communities in the southern Bay can experience increased flooding. The loss of coastal marsh and wetlands decreases the extent of specific habitat that waterfowl need to winter in the Bay region.

The report suggests that changing groundwater management practices could slow or mitigate land subsidence and relative sea-level rise. Moving groundwater pumping away from high-risk areas or decreasing groundwater withdrawal rates can reduce subsidence in low-lying areas prone to flooding. These results will be used by federal and state managers to consider adaptation strategies in their efforts to restore and protect the Chesapeake Bay.