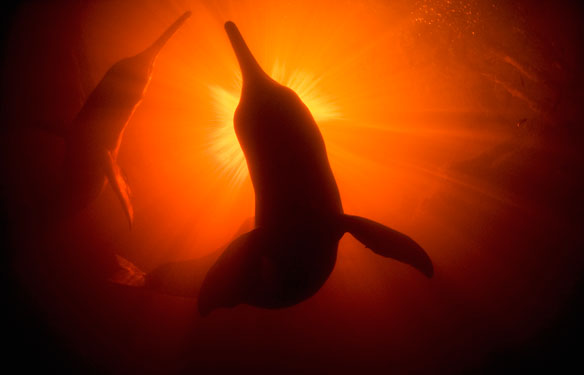 Scientists in Brazil have discovered a new species of a river dolphin from the Araguaia River basin of Brazil, the first such discovery in nearly 100 years.

River dolphins are among the world’s rarest creatures…

Original Study: “A New Species of River Dolphin from Brazil or: How Little Do We Know Our Biodiversity”, PlOs One
“True river dolphins are some of the rarest and most endangered of all vertebrates. They comprise relict evolutionary lineages of high taxonomic distinctness and conservation value, but are afforded little protection. We report the discovery of a new species of a river dolphin from the Araguaia River basin of Brazil, the first such discovery in nearly 100 years. The species is diagnosable by a series of molecular and morphological characters and diverged from its Amazonian sister taxon 2.08 million years ago. The estimated time of divergence corresponds to the separation of the Araguaia-Tocantins basin from the Amazon basin. This discovery highlights the immensity of the deficit in our knowledge of Neotropical biodiversity, as well as vulnerability of biodiversity to anthropogenic actions in an increasingly threatened landscape. We anticipate that this study will provide an impetus for the taxonomic and conservation reanalysis of other taxa shared between the Araguaia and Amazon aquatic ecosystems, as well as stimulate historical biogeographical analyses of the two basins…”