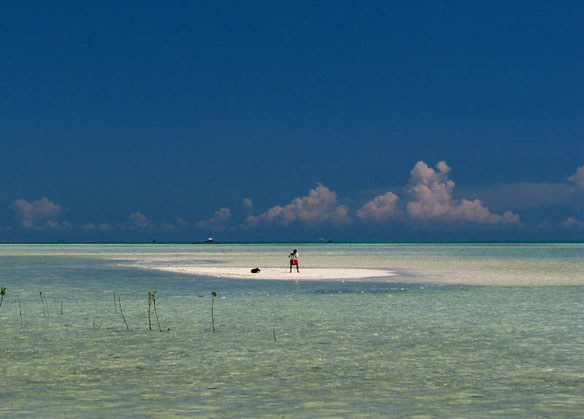 A Russian film crew arrived in Palau at the end of 2013 to shoot the reality show ‘Octpob’ on one of the archipelago’s more than 500 islands. The show leaves contestants in isolated locales with limited water and food to test their survival skills. In 2004, the US version of the show, Survivor, was also shot in Palau.

Palauans welcomed the TV crew and its glittering cast of celebrities – it did, after all, bring in much-needed revenue. But the situation presented an uncomfortable irony: while Russian and American contestants have tested their survival abilities in Palau, Russia and the US have adopted strong positions at the UN Framework Convention for Climate Change (UNFCCC) talks, which could threaten Palau’s own chances of surviving as sea levels rise.

The UNFCCC talks aim to come up with a treaty that assigns responsibility for reducing greenhouse gas emissions and for the provision financial and technical support to vulnerable countries, like Palau, that have not contributed to global warming. The talks have met resistance from the developed world and emerging economies like China and India, which say they are not responsible for past emissions and should not be held accountable for emissions in the future.

Time is running out for low-lying islands like Palau. The Asian Development Bank (ADB) said in a recent assessment, “if the world were to stay on the current fossil-fuel intensive growth model” dealing with the impact of changing climate in 14 of the Pacific Ocean islands, including Palau, could cost them 12.7 percent of their collective annual GDP equivalent by 2100.

These include losses in the production of the region’s main crops, drops in catches of tuna, and declines in tourism revenue as the coral reefs die. It also covers increasing health expenses. ADB estimates that “most of the estimated health costs would arise from respiratory disorders, followed by malaria, and deaths from tropical storms”.

Palau’s President Tommy Remengesau and former president Johnson Toribiong offer insight into the threats their land and other countries in their region face:

A search for justice

Frustrated by the lack of progress he saw at the two UNFCCC conferences he attended during his tenure, in 2009 and 2010, Toribiong decided to seek legal clarity on the issue from the International Court of Justice (ICJ).

To do this, he had to raise the issue at the UN General Assembly as a resolution, and he had to obtain majority support from member countries to pose the question: “What are the obligations under international law of a State for ensuring that activities under its jurisdiction or control that emit greenhouse gases do not cause, or substantially contribute to, serious damage to another State or States?”

President Remengesau told IRIN, “We made this request knowing fully well that the big countries of the world, who happen to be the big emitters, are actually the whole foundation of the United Nations.” The world’s biggest emitters are also the UN’s biggest donors, and all five permanent members of the UN Security Council are major greenhouse gas producers.

But Palauans realized the need “to have a heightened awareness and heightened discussion” on the issue, he said, which they hoped the resolution would bring.

Then Toribiong says he was asked by the US to “tone down our push for the submission of this question.” The US and other countries argued that a legal process to deal with the issue – the UNFCCC – already existed.

Toribiong says that since he left office in early 2013, the request has “languished”. But Remengesau says that the country is still lobbying for support from member states, and Toribiong also reiterated his willingness to push for support.

Yet insiders say it would be hard for Palau to go against the wishes of the US, which administered the archipelago as a trust territory from the 1940s to 1994. Palau has signed a Compact of Free Association with US, under which the US provides it with substantial financial assistance.

IRIN contacted the US government for a response to Toribiong’s comments. A US Department of State official said: “Both the causes and impacts of climate change are global in nature. We believe that the correct avenue for solving the climate problem is through concerted international action achieved through negotiations among parties, not through the type of judicial procedures offered by the ICJ.

“We are now in the middle of negotiations, agreed to by all parties, toward a new climate agreement, and we believe that the world is most likely to achieve an effective and ambitious global agreement if the global community focuses on those negotiations. If we focus on achieving a good outcome in 2015, we should be able to produce more effective approaches for addressing this critical problem.”

Some countries expressed support for the idea of an ICJ approach, while standing by the role of the UNFCCC talks. A spokesperson for the German environmental ministry told IRIN, “Germany was generally open to the initiative and to exploring the idea of an advisory opinion by the International Court of Justice.” But the UNFCCC, and its Kyoto Protocol, “is the appropriate forum to negotiate a common understanding of questions related to this evolving area of international law. The concerns underlying Palau’s initiative are now being addressed within this framework in the context of the negotiations around loss and damage.”

Shaping laws through the ICJ

In 2012, Stuart Beck, Palau’s then-ambassador to the UN, and Aaron Korman, Palau’s legal adviser, taught a course at Yale Law School in the US on Palau’s effort to secure a legal opinion from the ICJ. In a report produced by the course in 2013, co-authored with Yale academics Douglas Kysar and Joseph Field, Beck and Korman maintained that an ICJ advisory opinion “would promote international efforts to come to an agreement within the UNFCCC negotiation process. Even though the nature of an Advisory Opinion is non-binding, it would entail moral authority and would establish a new legal baseline for the UNFCCC to build upon by articulating a ‘clear legal standard applicable to all states’.”

There is precedent for the ICJ providing advisory opinions to the UN General Assembly to help shape international law.

In 1996, in response to a question by the General Assembly on whether the threat or use of nuclear weapons could ever be permitted under international law, the ICJ determined in an advisory opinion that “the threat or use of nuclear weapons would generally be contrary to the rules of international law applicable in armed conflict”, but it could not conclusively rule whether the threat “would be lawful or unlawful in an extreme cases of self-defence”.

The ICJ also helped shape international law with its ruling on the 1996 expulsion of Ahmadou Sadio Diallo, a Guinean citizen, from the Democratic Republic of the Congo (DRC) [then known as Zaire]. In 2010, the ICJ ruled that DRC had violated Diallo’s rights; the court also ordered DRC to pay compensation. Some analysts feel the climate change question could lead the ICJ to assess loss and damage caused by climate change, which could eventually open the door to discussions on whether affected countries need to be compensated.

Cosmin Corendea, an associate academic officer with the UN University Institute for Environment and Human Security (UNU-EHS), says it would be worth the effort to get an ICJ opinion on climate change.

“The ICJ never denied rendering its opinion when asked by the UN General Assembly. More, it proved its determination in shaping new international law when issuing its opinion in the nuclear weapons case (one of the most relevant opinions in regards to climate change) or when judging on compensation [in the] Diallo case (first case on damages in a human rights case),” Corendea told IRIN in an email.

He added, “However, for ICJ in its advisory capacity to influence the new climate change agreement(s) and progressively determine new legal approaches towards this increasing phenomenon, there is a strong need of political will, which would eventually translate in[to] an official request by the UN General Assembly. Until then, many speculations and interrupted opportunities will arise, while ICJ judges are still waiting in their chambers [to express] their valuable opinions in regards to climate change.” 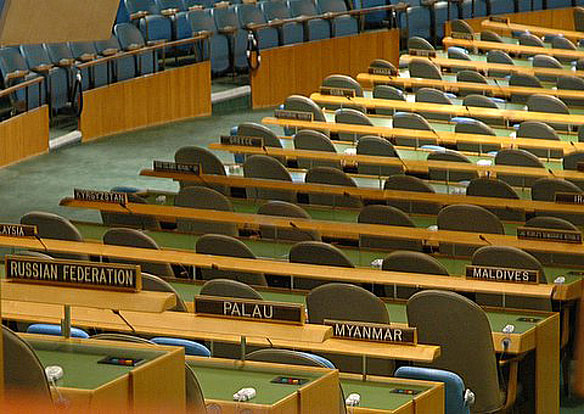