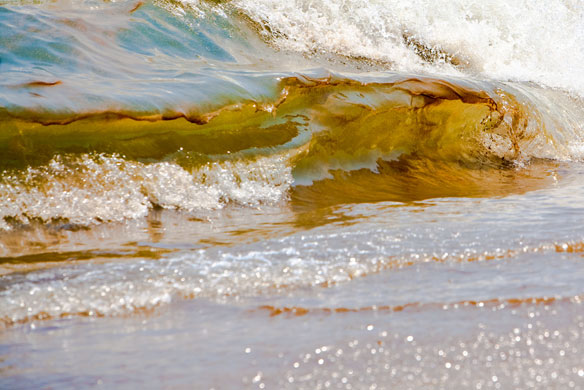 A newly developed computer model holds the promise of helping scientists track and predict where oil will go after a spill, sometimes years later.

U.S. Geological Survey scientists developed the model as a way of tracking the movement of sand and oil found along the Gulf of Mexico since the Deepwater Horizon oil spill. The new tool can help guide clean-up efforts, and be used to aid the response to future oil spills.

Following the Deepwater Horizon spill, denser-than-water conglomerates of sand and oil have been found in the surf zone, ranging in size from less than a millimeter to mats up to a few meters in size. The surf zone is where waves break as they approach the shore.

The USGS study looked at conglomerates several centimeters thick, known as “surface residual balls,” or “SRBs”, which continue to emerge in some beach locations more than three years after the first oil reached the shoreline.

Applying the model to movement of SRBs along the coast of Alabama and western Florida showed that normal wave conditions, less than 1.5 to 2 meters, will not move centimeter-sized SRBs alongshore. However, tropical storms, or winter storms can mobilize and redistribute these SRBs alongshore.

The numerical model indicated that inlets trap SRBs, where they could accumulate over time. The model also suggests that when larger SRBs are found they are more likely to have been formed locally when the oil came ashore, rather than being transported from a different location along the coast.

Published this week in Marine Pollution Bulletin, the report also shows that SRBs are likely to be covered and uncovered by sand that is relatively easily moved by waves and currents in the surf zone.

“SRBs are dense enough to rest on the seafloor, rather than floating. Because sand grains are smaller and more mobile than the larger SRBs, under non-storm conditions when the SRBs themselves are not moving, they can be buried and exhumed by mobilized sand,” said P. Soupy Dalyander, a research oceanographer and lead author of the study.

In addition to providing guidance for the Deepwater Horizon clean-up effort, the USGS methodology has broader potential application.

“The techniques developed here can be applied to evaluate the potential alongshore movement of SRBs in other locations or from any future spill where large quantities of oil and sand mix in the surf zone”, said Dalyander.