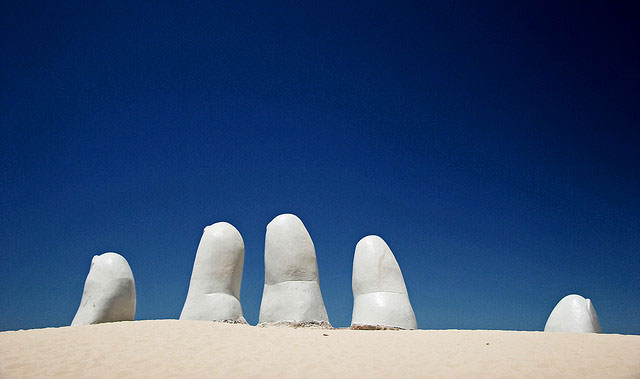 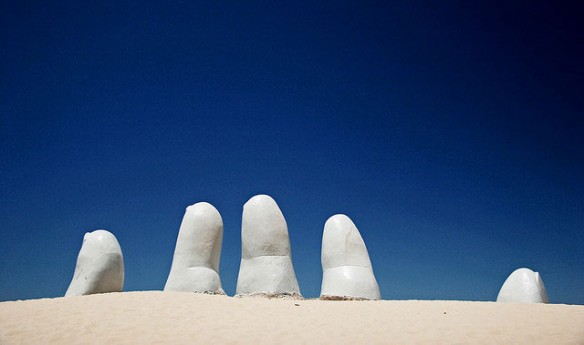 Hombre Emergiendo a la Vida, by Mario Irarrázabal, Punta, del Este beach, Uruguay.
“Man Emerging into Life”- Hombre Emergiendo a la Vida, is a sculpture by Chilean artist Mario Irarrázabal, created while he was attending the first annual International Meeting of Modern Sculpture in the Open Air in Punta del Este, Uruguay. He later made near or exact replicas of the sculpture for the city of Madrid (in 1987), in the Atacama Desert in Chile (1992), and in Venice (1995).
He was inspired to make a sculpture of a hand “drowning” as a warning to swimmers, since the waters at La Barra up the beach, had rougher waves. Captions. Photo source: Matt Hintsa

Chile appears to have learned a few lessons from the 2010 earthquake and tsunami, and it successfully drew on them the night of Apr. 1, when another quake struck, this time in the extreme north of the country.

Frightened by the intensification of seismic activity in the last few years, local residents fled for the hills, two km away from the Pacific ocean, after a tsunami alert was issued by the Chilean Navy’s Hydrographic and Oceanographic Service.

But despite the fear, nearly one million people participated efficiently in a mass evacuation…