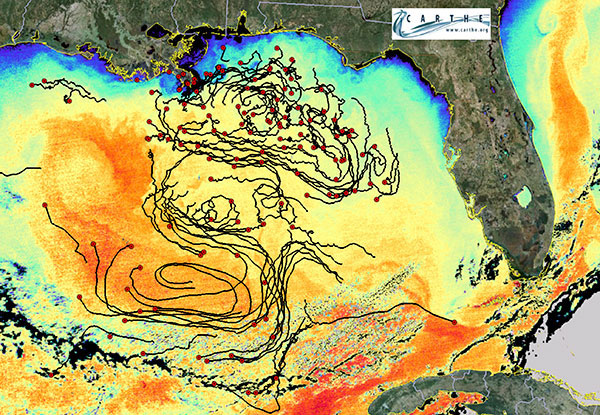 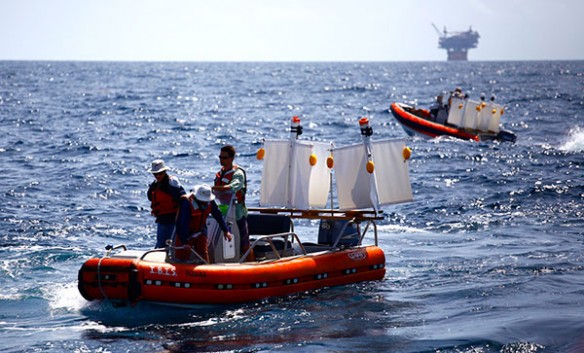 CARTHE scientists deployed over 300 GPS-equipped surface current drifters in the Gulf of Mexico near the site of the Deepwater Horizon oil spill during the Grand Lagrangian Deployment, July 2012. Image credit: ©CARTHE

By The UM Rosenstiel School of Marine and Atmospheric Science;

A new study of the ocean circulation patterns at the site of the Deepwater Horizon oil spill reveals the significant role small-scale ocean currents play in the spread of pollutants.The findings provide new information to help predict the movements of oil and other pollutants in the ocean.

Nearly two years to the day after the Deepwater Horizon incident, scientists from the Consortium for Advanced Research on Transport of Hydrocarbon in the Environment (CARTHE), based at the University of Miami (UM) Rosenstiel School of Marine and Atmospheric Science, conducted a drifter experiment in the northern Gulf of Mexico spill site to study small-scale ocean currents ranging from 100 meters to 100 kilometers.

“Our results conclusively show that ocean flows at small scales, below 10 kilometers, contain significant energy fluctuations to control the initial spread of pollutant clouds,” said UM Rosenstiel School Professor and CARTHE Director Tamay Özgökmen. “Now that we have quantified this missing piece of the puzzle, we can improve our real-time predictive capabilities in the event of a future oil spill.”

During the 12-day at-sea experiment called GLAD (Grand Lagrangian Deployment), the research team deployed 300 GPS-equipped custom drifter soff the UM Rosenstiel School research vessel F.G. Walton Smith in a region where wind-driven continental shelf currents mix with buoyancy-driven Mississippi River outflow currents and deep eddy-driven currents in the Gulf of Mexico. The drifters flowed along the Gulf of Mexico currents for several months post deployment to capture a multidimensional picture of the upper-ocean movements in the presence of wind and waves at DeSoto Canyon, the site of the Deepwater Horizon oil spill. This was the first experiment to deploy so many drifters at once. Data about their whereabouts was retrieved every five minutes.

The study, aimed at quantifying the small-scale circulation that cannot be captured by satellite-based altimeter measurements or general circulation models, has immediate practical applications to help better predict the path of catastrophic pollutant events, such as from future oil spills or nuclear disaster events. The results provide new information about the significant dispersion patterns currently un-accounted for in ocean circulation models, according to the authors.

“This experiment is helping to answers questions that arise in all major oil spills, such as ‘where will the oil go?’ and ‘how fast will it get there?’ which are important when allocating limited response resources and to determine the overall socio-economic impact of the spill,” said Özgökmen. The GLAD research experiment study was made possible by a grant from the Gulf of Mexico Research Initiative (GoMRI). The GoMRI is a 10-year, $500 million independent research program established by an agreement between BP and the Gulf of Mexico Alliance to study the effects of the Deepwater Horizon incident and the potential associated impact of this and similar incidents on the environment and public health. For more information, visit http://gulfresearchinitiative.org/.

The CARTHE program includes 26 principal investigators from 14 research institutions in eight states. Together these scientists are engaged in novel research through the development of a suite of integrated models and state-of-the-art computations that bridge the scale gap between existing models and natural processes. For more information about CARTHE, please visit www.carthe.org or on Facebook at www.Facebook.com/carthe.gomri. 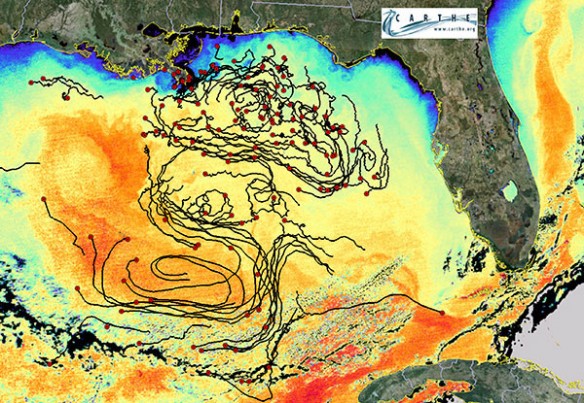 Drifter trajectories from the Grand Lagrangian Deployment approximately four months after being released near the Deepwater Horizon oil spill site. The background shows the sea surface temperature over the Gulf of Mexico from MODIS on 20 October 2012. Image credit: ©Edward Ryan, UM Rosenstiel School of Marine and Atmospheric Science.