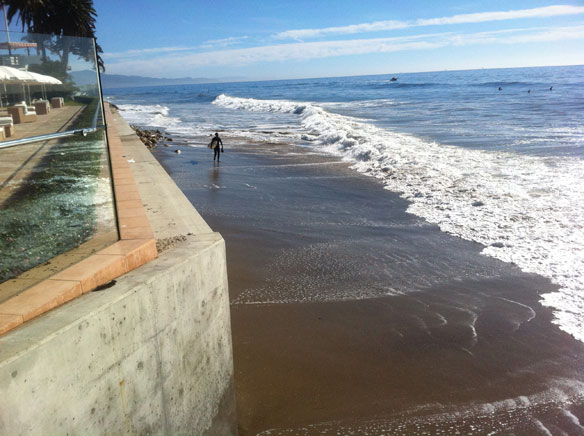 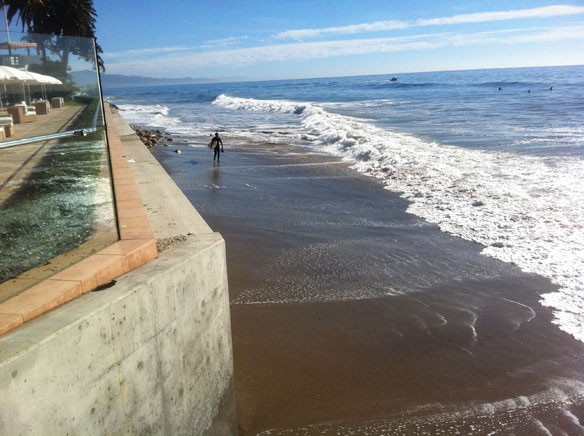 They are highly efficient and effective killers. Their unique, ugly skill is their ability to simultaneously kill in all directions.

First, they choke the sediment eroding down the bluffs that would otherwise replenish beaches.

The seawalls reflect the power of retreating waves which rip away the body of the beach and drown it by carrying the valuable beach sand out to sea.

Equally destructive but unseen, is the often undersea beach loss from the seawalls. That’s because the outgoing, reflected waves also rip away the sea floor on each outgoing surge.
This outgoing surge creates a steeper, undersea slope. Those steeper slopes then choke the ability of incoming waves to bring new sand to replenish an already eroded beach.

Just think of the difficulty of pushing a boulder uphill. The new, steeper offshore slopes are the same thing – just at a smaller, granular scale.

And finally, like a serial killer, seawalls often kill the nearby beaches. The new, steep undersea slope breaks the back of the sand supply moving down the coast. Gravity simply pulls the grains of sand into the ocean depths. So neighboring beaches are often starved of the sand that would otherwise be supplied from littoral, shoreline currents.

What’s Wrong With This Picture?
A society that encouraged killers would be judged to be absolutely mad. Californian’s take pride in being green and enlightened. We love our public beaches. They are part of our identity. California’s many public beaches also provide one of the best sources of recreation for inland and working class people.

So if we’re so smart and environmental, why do we continue allow the very thing (seawalls), that kill the invaluable public beaches we claim to love?

Why would we ignore that which our scientists and engineers have warned us for years? Why have other states like Maine, North and South Carolina and Texas long banned all seawalls and jetties?

Why did some of these “conservative” states reach this enlightened conclusion 30 years ago and stick with it? Why has California not been a leader?

Our Beaches Need An Intervention
About 10% of California’s coastal shore has seawalls. In Southern California, it’s over 30% of the shoreline.

Seawalls provide immediate protection for a single coastal property owner. Yet when seawalls go in, public beaches vanish. Sea level rise will magnify the problem. Is our coastal future really destined to be a shoreline of seawalls and dead or vanished beaches?

Seems like we’re shooting ourselves in the foot by ‘serial killing’ our beaches for several past decades. What’s worse is that our state law actually requires it! Maybe we need an intervention. We may be overdue for a very serious talk about just why official state policy is killing our beaches. 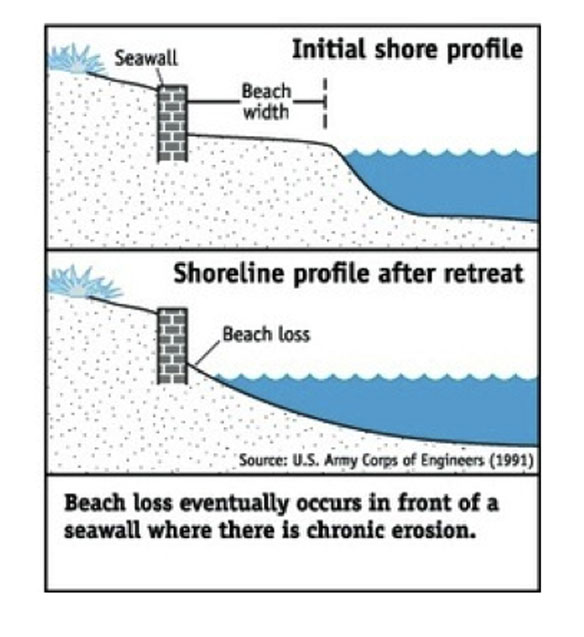 “I am the Director of the Program for the Study of Developed Shorelines, a joint Duke University-Western Carolina University venture. The Program is a research and policy outreach center serving the global coastal community. We conduct scientific research into coastal processes and sea level rise.

I fully support the efforts of the California Ocean Protection Council to formally address sea level rise and storms while developing a hazard avoidance policy under the Safeguarding California Plan. OPC leadership should also make it very clear that the construction of seawalls, bulkheads and revetments must not be included in the toolkit for wise climate change adaptation or infrastructure protection.

The reason for this is simple: seawalls ultimately destroy the beaches in front of them and have significant impacts on neighboring beaches and properties. This is why states ranging from North and South Carolina to Oregon currently ban the construction of new seawalls. The science is clear and indisputable. The United States Army Corps of Engineers recognized these problems in a 1981 Technical Note entitled “Seawalls Their Applications and Limitations” (CETNIII-8):

Seawalls protect only the land immediately behind them, offering no protection to fronting
beaches. Also on a receding shoreline, recession will continue on the adjacent shore and
may even be accelerated by the construction of a seawall. If nearby beaches were being
supplied with sand by the erosion of the area protected by a new seawall, the beaches will
be starved and will experience increased erosion. Therefore, if a beach is to be retained
adjacent to a seawall, additional structures may be necessary. Seawalls generally reflect
wave energy which causes increased scour immediately in front of the wall. Wave run-up
and overtopping of the wall may scour the backfill.

Much of the beach loss from seawall construction comes from what scientists call “Passive Erosion.” Building a seawall between a building and a beach does not stop the natural retreat of that shoreline. The beach will continue to erode until it simply disappears in front of the seawall. Sea level rise will make this process happen even more quickly. So, as the calls to provide protection for private property and infrastructure grow louder due to changing climate, the impacts of bad decision, like building seawalls, will become even more severe.

More than 10% of California’s iconic shorelines are already walled off. These existing walls are already causing significant problems to neighboring beaches because they close off the eroding bluffs, cliffs, and dunes that were naturally adding sand to shorelines nearby. Sand is to the coast what water is to the West. You cannot allow it to go unmanaged, and you cannot allow individuals or localities to seal off sand that was destined for the benefit of all. This is what seawalls do.

I urge you to pursue policies that reduce risk along the oceanfront by truly avoiding the hazards, not blocking them with brute force engineering. This will preserve public recreation, public access, the California aesthetic, and the economic value of the coast shared by all Californians.” —Robert S. Young, Director, Program for the Study of Developed Shorelines, Professor, Coastal Geology, Western Carolina University