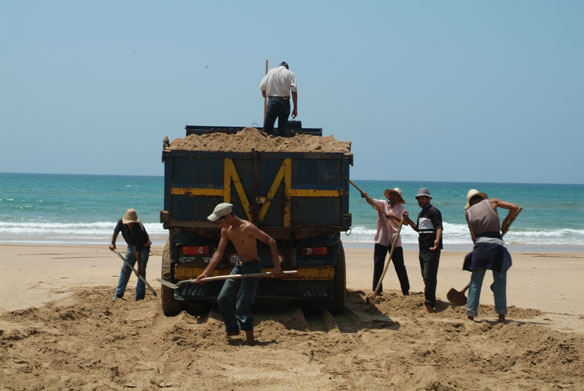 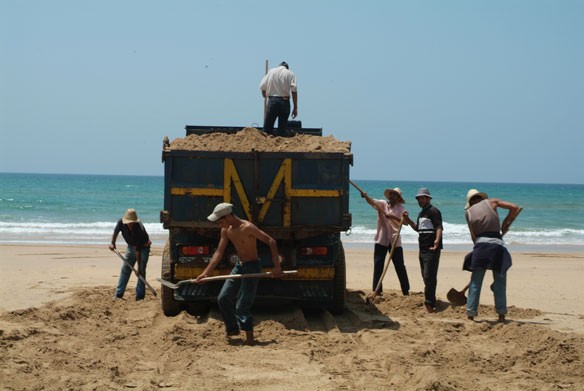 Beach sand mining. Photograph: © SAF — Coastal Care.
“Sand is the second most consumed natural resource, after water. The construction-building industry is by far the largest consumer of this finite resource. The traditional building of one average-sized house requires 200 tons of sand; a hospital requires 3,000 tons of sand; each kilometer of highway built requires 30,000 tons of sand… A nuclear plant, a staggering 12 million tons of sand…” Captions by © Denis Delestrac

Sand – inexpensive and abundant – is a treasure to India’s builders and the construction industry, which employs some 40 million people.

Prime Minister Narendra Modi’s government plans to develop 100 “smart cities” under its “a new Chicago every year” slogan. To meet this goal, India needs $1.04 trillion of investments in infrastructure.

But the spike in construction means sand mining, both legal and illegal, will increase in coastal areas, riverbeds, creeks, and rivulets…

Lawlessness in India: Sand Mafias Thrive Without Shroud Of Fear, One India News (07-05-2014)
The practice of illegal mining is common in the entire state of Uttar Pradesh along the riverbeds as there is constant demand for sand. Due to increasing demand for sand by realtors, the seemingly unceasing mining operation on the Yamuna and Hindon riverbeds is encouraged.