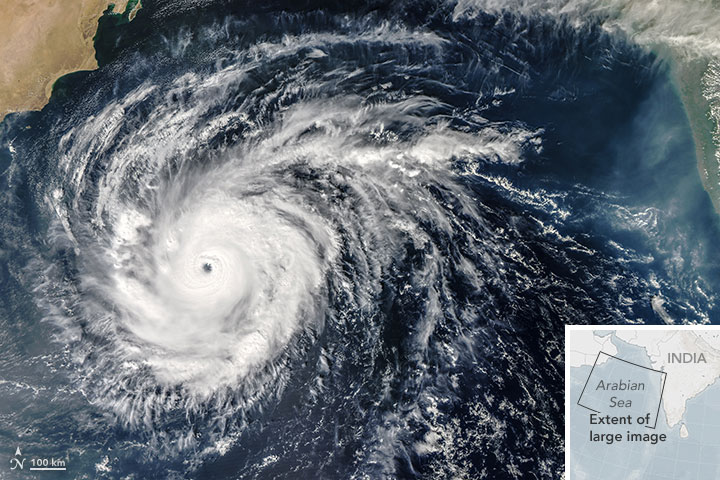 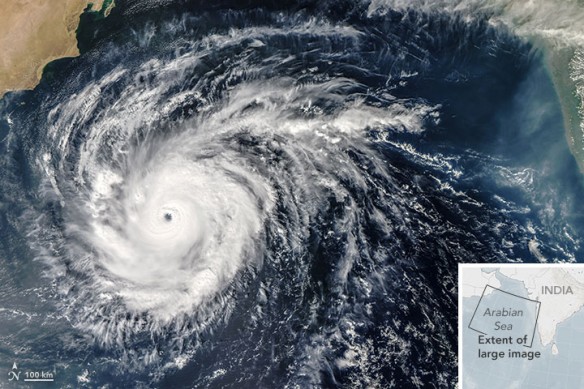 Citizens of the arid Arabian Peninsula were bracing for strong winds, a storm surge, and extreme rainfall as Cyclone Chapala (04A) was forecast to make landfall in early November 2015. Only two tropical cyclones have hit the Peninsula since reliable records started in 1979, and Chapala has the potential to be the strongest of them all. Weather forecasters were calling for several years’s worth of rain to fall on Yemen and Oman over the course of just two or three days.

The Moderate Resolution Imaging Spectroradiometer (MODIS) on NASA’s Aqua satellite acquired this natural-color image of Chapala in the Arabian Sea at 1:10 p.m. local time (09:10 Universal Time) on October 30, 2015. At the time, the tropical cyclone had sustained winds between 130 and 135 knots (150-155 miles or 240-250 kilometers per hour) and significant wave heights of 38 feet. The potent storm was moving westward across the Arabian Sea. The image below, acquired by the Visible Infrared Imaging Radiometer Suite (VIIRS) on Suomi NPP, shows the storm at 12:30 p.m. local time (08:30 UTC) on October 29, 2015. 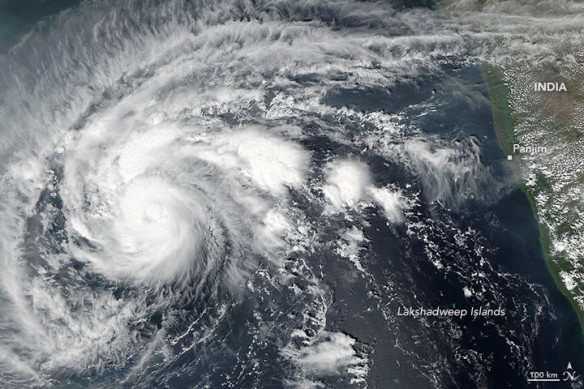 Chapala started as a tropical depression off of India on October 28. Much like Hurricane Patricia off of Mexico, the storm intensified rapidly, with wind speeds accelerating from 65 to 155 miles (105 to 250 kilometers) per hour in a day. Meteorologist and blogger Eric Holthaus noted that the storm may have been fueled by record warm water temperatures in the Arabian Sea and northern Indian Ocean. Other scientific sources show that global temperatures this year are on track to be the warmest on record as El Niño conditions have added to overall, long-term climate warming.

Forecasts suggest Chapala will reach super cyclone category 5 status on October 31, but then weaken as it moves north and meets the extremely dry air of the Arabian Peninsula. It has the potential to make landfall in Yemen and Oman as a category 1 cyclone. But whether or not it sustains its winds, the storm should drop substantial rainfall over the parched region. Forecasters from the UK Met Office noted that the storm could produce up to 20 inches (500 millimeters) of rainfall in some places—four to five times the yearly average for the region. The storm is also having an impact on the busy shipping routes to the Indian Ocean through the Gulf of Aden.