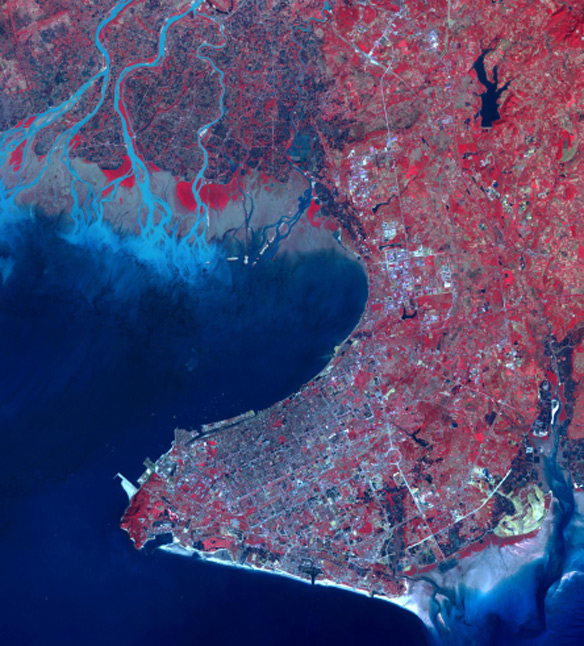 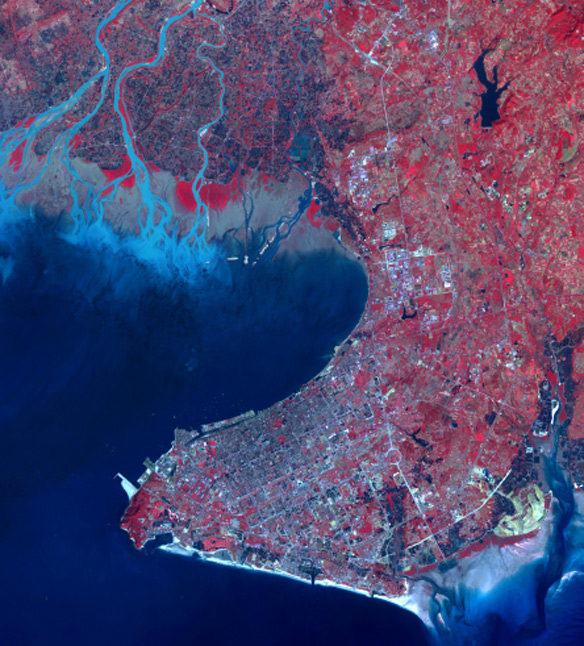 Beihai is a city in the south of Guangxi, People’s republic of China. It is a seaport on the north shore of the Gulf of Tonkin (Vietnam), also known as the Beibu Gulf (China).
The Gulf is defined in the west by the northern coastline of Vietnam, in the north by China’s Guangxi province, and to the east by China’s Leizhou Peninsula and Hainan Island.
Historically it has been an international trade port for many provinces to the north. From a population of about 150,000 in 1990, Beihai has grown to over 1,600,000 in 2013. Between the years 2006 and 2020, Beihai is predicted to be the world’s fastest growing city. Captions source: NASA

The vast tracts of mangrove forest in the Beibu Gulf of Guangxi Zhuang Autonomous Region have been almost erased by the immense construction of marine reclamation lands and industrial plants.

Simply because mangrove trees can hardly yield any profitable economic returns, they have been cut down to make place for the development of more profitable industries, said Fan.

An official report on the environmental conditions of the coastal area issued in Guangxi has shown that the sea water near the shore has been severely contaminated by the pollutants majorly consisting of inorganic nitrogen, petroleum related substances and reactive phosphate.

Crisis Response: When Trees Stop Storms and Deserts in Asia; WRI (02-25-2016)
A history of deforestation has made Asian nations like Vietnam, China and South Korea especially vulnerable to coastal storms, floods and sandstorms. Yet just as these nations have experienced similar crises, they’re also all pursuing a solution—restoring degraded landscapes…