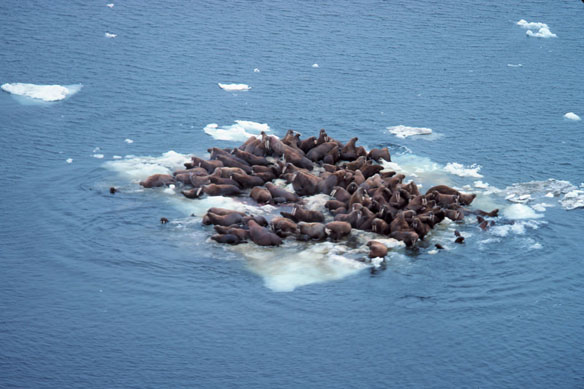 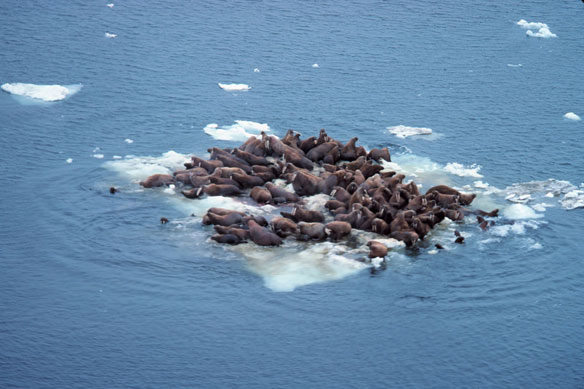 The Pacific Walrus Coastal Haulout Database, based on generations of observations shared by Russians and Americans over more than 160 years, is now available to assist planning efforts of wildlife managers, mariners, industry and others operating in the Arctic.

The database shows where walrus haulouts may be found. This information is vital to reduce the risk of mortality events from human-caused disturbance or pollution.

“It’s great to see this information in a consistent format, on a user-friendly platform, and up to date,” said James MacCracken, walrus program supervisor at the U.S. Fish and Wildlife Service. “This should be very useful to anyone planning activities that may occur near a haulout and as well as the USFWS’s assessment of those activities.”

Walruses are large marine predators that must rest out of water on sea ice or the coast between feedings along the shallow arctic sea floor. Female Pacific walruses and their calves in particular traditionally spend summers far from shore. However in recent years, loss of summer sea ice over the continental shelf has forced many walruses to travel to the Arctic coasts of the U.S. and Russia where they haul-out on shore to rest. When hauling out on the coast, they often gather in large numbers and use specific locations, termed haulouts, where they may be vulnerable to disturbance and pollution events.

To produce the database, scientists from the U.S. Geological Survey, the U.S. Fish and Wildlife Service and their Russian counterparts at the Russian Academy of Sciences and Chukot-TINRO, combed through published reports, state records, as well as observations from coastal residents, aviators and scientists.

“This database reveals the full geographic context of all places where Pacific walruses have been observed repeatedly resting on shore or in large numbers,” said Anthony Fischbach, wildlife biologist with the USGS. “The database is the result of generations of Russians and Americans, who openly shared their wildlife observations.”

The data can be used in GIS applications, such as Google Earth, or worked with in NOAA’s Arctic Environmental Response Management Application.

Each haulout entry in the database provides a narrative describing the geography and history of reported use with citations to reports and personal communications. The publication of these data are possible because of the long-standing good working relationship that scientists have across the Bering Strait dating back to the first joint surveys in 1975.

A summary report of this database provides an overview of the distribution patterns of the Pacific walrus haulouts.

The walrus research reflects a large interagency and international effort including USGS, the U.S. Fish and Wildlife Service, the Russian Academy of Sciences and Chukot-TINRO. USGS is also coordinating with the US Coast Guard, NOAA’s Office of Response and Restoration, Eskimo Walrus Commission, North Slope Borough, affected National Wildlife Refuges, the NPS Bering Straits Land Bridge and the State Department. 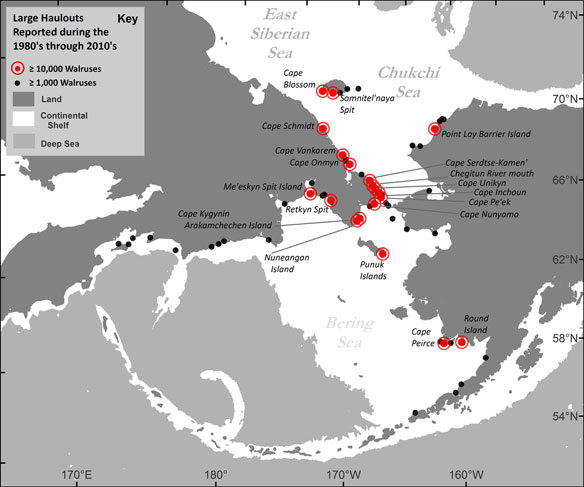 Map showing Pacific walrus coastal haulout locations reported in the past four decades (1980s– 2010s), with a maximum aggregation size of greater than or equal to 1,000 walruses.