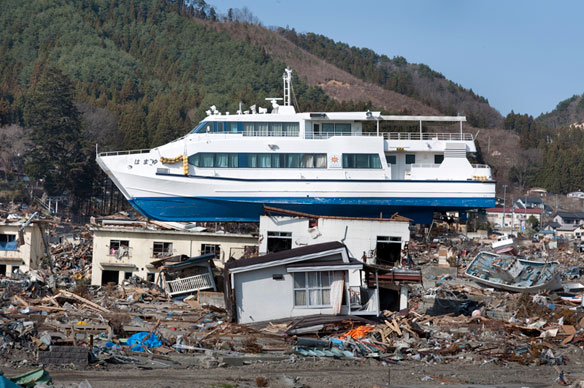 Following the tsunami in 1933, coastal towns in Japan began to construct “tsunami seawalls” to protect lives and property from this repeated hazard. After the death and destruction of 2011, the effectiveness of tsunami seawalls has been called into question.

Many critics claim that seawalls are detrimental because they offer a false sense of security, and prevent residents from being able to see the approaching danger first-hand. Moreover, they also say that the presence of seawalls tends to encourage residents to build homes in vulnerable areas rather than in safer places further inland or uphill…

Japan’s sea wall: Storm brews over plans to construct giant $6.8 billion USD barrier against tsunamis; Independent UK (03-05-2016)
In a country with about 20 per cent of the world’s strong earthquakes, and pummelled by a tsunami roughly every seven years, the survivors know that some day calamity will almost certainly strike again. Japan’s government wasted little time announcing a tried-and-tested solution: pouring concrete.
When the 2011 tsunami hit Japan, nearly 90 per cent of the sea walls along the north-east coast crumbled, a blow to a country considered among the best protected from the fury of natural disasters…
A joint report by the ministries of agriculture and land says 14,000km (8,700 miles) of Japan’s 35,000km coastline requires tsunami protection. “It’s madness…”

Japan Mulls Massive, 250-Mile Sea Wall To Fend Of Tsunamis; Phys.Org (03-22-2015)
Four years after a towering tsunami ravaged much of Japan’s northeastern coast, efforts to fend off future disasters are focusing on a nearly 400-kilometer chain of cement sea walls, at places nearly five stories high. Opponents of the $6.8 billion plan argue that the massive concrete barriers will damage marine ecology and actually do little to protect residents who are mostly supposed to relocate to higher ground…

Japan’s tsunami waves did top historic heights (04-25-2011)
Tsunami waves topped 60 feet or more as they broke onshore following Japan’s earthquake, according to some of the first surveys measuring the impact along the afflicted nation’s entire coast. Some waves grew to more than 100 feet high, breaking historic records, as they squeezed between fingers of land surrounding port towns…

Tsunami Warnings, Written In Stone, The New York Times
The stone tablet has stood on this forested hillside since before they were born, but the villagers have faithfully obeyed the stark warning carved on its weathered face: “Do not build your homes below this point!”

Are We Wiser About Tsunamis? Science Daily (09-23-2015)
The world may not be well prepared for the next significant tsunami, report researchers…