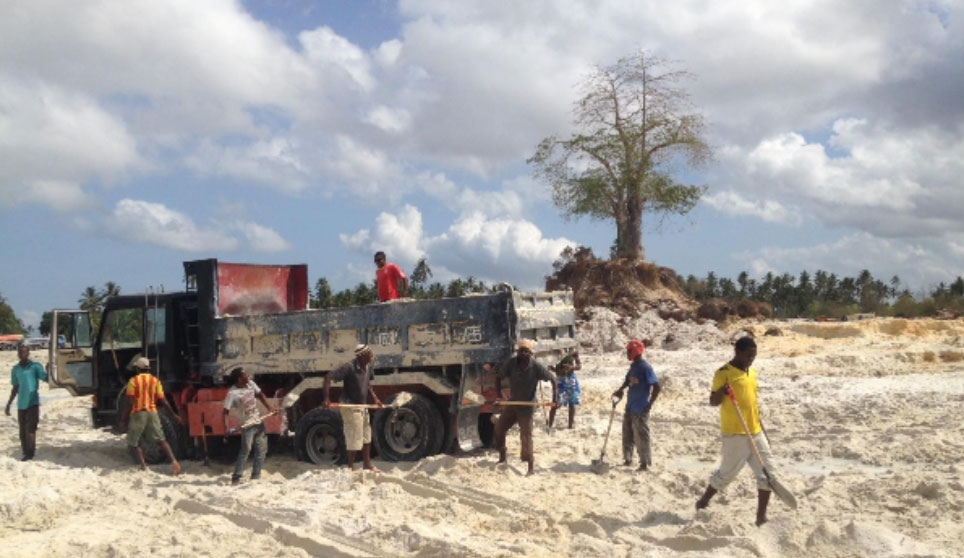 An Assessment of the Impact of Sand Mining: Unguja, Zanzibar, Tanzania 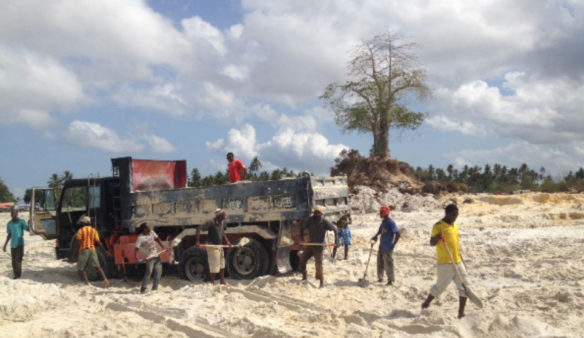 Abstract; By Caroline Ladlow (May 6, 2015)
The environmental, economic, and social impacts of sand mining activities were studied at various sites on the island of Unguja.

The effects on vegetation, coastal erosion, communities, and local economies were researched based on field observations and interviews with local people and officials at the various sites. Five primary sites were visited throughout this study, three illegal quarries, one abandoned legal quarry, and one active legal quarry. The environmental impacts at each of the five sites were decidedly destructive, and the economic and social results were also found to be generally harmful as many people, children, and animals have drowned and the number of fruit­bearing trees and farms are shrinking, which decreases local incomes. The accelerated erosion, lack of plant regeneration, and reported issues with mining in local communities demonstrate that sand mining in Unguja has had adverse impacts overall…

In Tanzania much of the mining occurs along riverbanks, while in Zanzibar it occurs along the coasts, though both processes contribute greatly to coastal erosion (Masalu, 2002 & Nyandwi, 2010).

In mainland Tanzania, in comparison to Zanzibar, sand mining is done mainly along the coast and in river beds. This does a great deal of damage because it destabilizes the river banks and may collapse any bridges along them (Nyundwi, 2010). On the contrary, mining in Zanzibar is generally done on the coastal beaches or in the hinterland areas that are richer in available sand. Environmentally, mining along riverbanks and coastlines has had irrevocable effects, though it has had many social impacts as well. Illegal sand mining in the mainland, as well as in Zanzibar, can often create bad relationships between miners and property owners or communities. This occurs because the miners threaten property owners which creates an unfriendly and violent atmosphere (Masalu, 2002). Sand mining tends to occur along coastal zones due to the abundance of sand available to miners. The shoreline provides an open space without abundant vegetation, simplifying the process and providing a space where the evidence of mining will be erased with the tide. However, this contributes greatly to the coastal erosion problem that Zanzibar is already experiencing