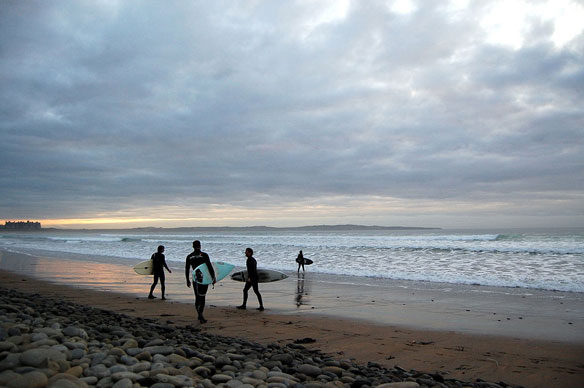 Donald Trump’s plan to erect a huge sea wall at his Irish golf course has been withdrawn in the light of stiff opposition.

Donald Trump pulls plans for wall next to Co Clare golf course, The Belfast Telegraph (12-06-2016)
The shelved project had been planned for the edge of the golf links where severe winter storms have wiped out metres of beach and dune in recent years. Mr Trump has said he is not a great believer in man-made climate change but cited global warming and rising seas as a reason for needing the wall…

“Trump’s Irish seawall defeated;” By Save the Waves Coalition
“Under growing international pressure, Trump International Golf Links (TIGL) has rescinded their proposal for the 3km seawall at Doughmore Beach, Ireland.
The Trump Organization’s decision represents a remarkable victory for the Save The Waves and the local Irish group’ #NatureTrumpsWalls campaign. The campaign was successful in gathering over 100,000 petition signatures, sending a strong message to TIGL and the local decision-makers that there was vast global opposition to the project.
Apparently, they were listening…”

Donald Trump Wants to Build Another Wall in Ireland and Local Surfers Aren’t Happy; The Inertia