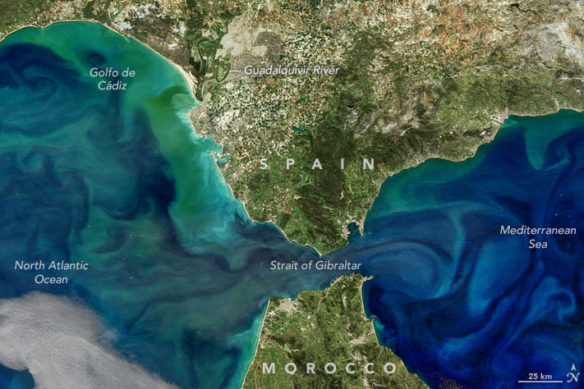 From space, the Strait of Gibraltar appears tiny compared to the continents it separates. At the strait’s narrowest point, Africa stands just 14 kilometers (9 miles) from Europe. But the narrow waterway is a complex environment that gives rise to striking phytoplankton blooms when conditions are right.

Water conditions and circulation near the strait produced a bloom with colorful tendrils visible in this image, acquired on March 8, 2017. The image is composed from data acquired with the Visible Infrared Imaging Radiometer Suite (VIIRS) on Suomi NPP, and the Moderate Resolution Imaging Spectroradiometer (MODIS) on NASA’s Aqua satellite. A series of processing steps were applied to highlight color differences and bring out the bloom’s subtler features.

The intricate swirls of phytoplankton trace the patterns of water flow, which in this region can become quite turbulent. For example, water moving east from the North Atlantic into the Mediterranean Sea has created turbulence in the form of internal waves. These waves—sometimes with heights up to 100 meters—occur primarily deep within the ocean, with just a mere crest poking through the surface. At the same time, water flowing west helps stir up water in the North Atlantic, including the Golfo de Cádiz.

While most of the swirls of color are phytoplankton, ocean scientist Norman Kuring of NASA’s Goddard Space Flight Center notes that some of the color near coastal areas could be due to sediment suspended in the water, particularly near the mouths of rivers. Some of the yellow-green plume near the Guadalquivir River, for example, could be due to colored dissolved organic matter (CDOM).

“My guess is that there is less suspended sediment along the Iberian and African coastlines than you might expect to find in eastern U.S. coastal waters, which overlay a broader continental shelf than what is found around Iberia,” Kuring said.