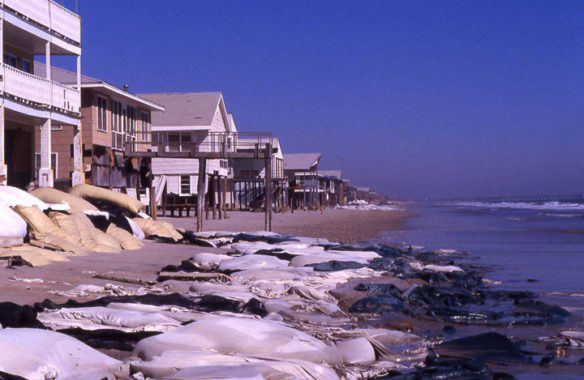 Days after a federal report issued a harsh warning about climate change, an environmental group said North Carolina’s policies leave the state among the most ill-prepared on the East Coast to deal with the effects of rising seas…

Sandbagging at the Shore: North Carolina’s Coastal Sand Bags and Political Sandbaggers; By William Neal, Orrin Pilkey & Norma Longo; (04-2017)
The wonder of modern English is how social use of language expands and changes the meaning of words. Sand bag is a bag filled with sand used for temporary construction—quickly made, easily transported, and easily removed. Typically, sandbagging is the emplacement of sand bags to construct a temporary protective wall or barrier, such as a dike or dam to hold back flood waters , or protection on the battlefield. But the term ‘sandbagging’ has taken on an array of other meanings…

Pilkey: The Paris agreement, climate change, NC coast and rising seas; News Observer (06-03-2017)
Now that we as a nation have divorced ourselves from the Paris Agreement on reduction of carbon emissions and global climate change, it’s time for us to do some self-examination. We assume that our abstention will ultimately add to the carbon-emissions problem, perhaps discourage other countries and have some impact on sea-level rise…