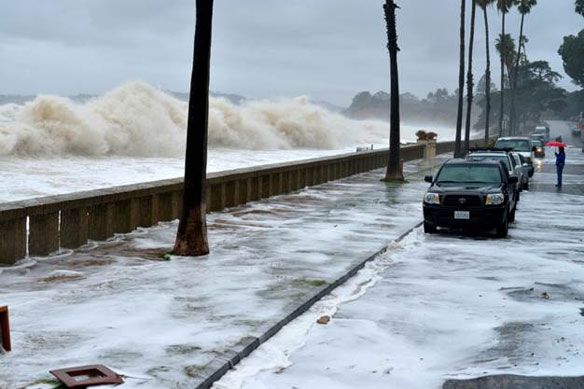 People living on the coast may see flooded sidewalks and streets more frequently this year due, in part, to El Nino conditions that are predicted to develop later this year, and from long-term sea level rise trends. The projected increase in high tide flooding in 2018 may be as much as 60 percent higher across U.S. coastlines as compared to typical flooding about 20 years ago, according to NOAA scientists.

These predictions are part of NOAA’s 2017 State of High Tide Flooding and 2018 Outlook, a report produced by NOAA’s Center for Operational Oceanographic Products and Services every year since 2014.

The report finds that during the 2017 meteorological year (May 2017-April 2018), the U.S. average number of high tide flooding days was the highest measured at 98 NOAA tide gauges. More than a quarter of the coastal locations tied or broke their individual records for high tide flood days.

The top five cities that saw the highest number of flood days across the U.S. and broke records include Boston; Atlantic City, New Jersey; Sandy Hook, New Jersey; Sabine Pass, Texas; and Galveston, Texas. These cities faced the brunt of an active nor’easter and hurricane seasons and sea level rise, which has made these and other less extreme events more impactful.

Understanding risk and flooding vulnerability in our nation’s coastal communities

The report’s authors focused on more impactful, deeper high tide flooding in some locations than in previous reports. It assesses high tide flooding based on new, national flooding thresholds released in February, which causes the number of flood days tallied in the report to be lower in some cities compared to previous years.

This does not mean there are less flooding days. The new report uses a higher threshold elevation at some locations such as Annapolis, Maryland, Washington, D.C., Wilmington, North Carolina and San Francisco, meaning water must get higher at the tide gauge before it counts as flooding. In these locations, floods with minimal above-ground infrastructure impacts are not included.

Using this new method helps establish a national coastal flooding vulnerability assessment that can help identify flooding that would typically impact infrastructure throughout a region, rather than at a single location. As they examine their risk, communities can use this information can help better mitigate and prepare for high tide flooding from long-term sea level rise.

Sea levels are already rising. What’s next? National Geographic (11-18-2017)
Climate change is battering coasts with storms and floods, but we still haven’t grappled with the risks of what’s to come…