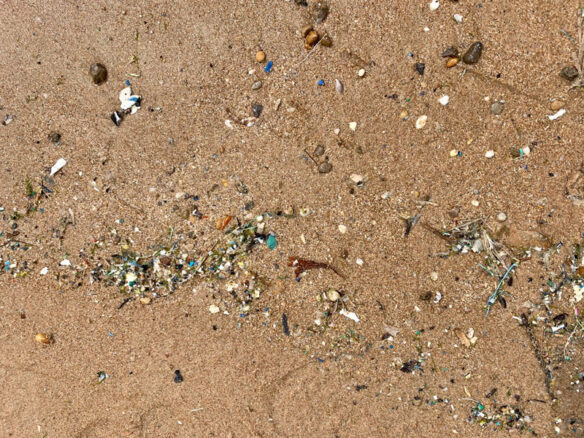 Microplastics on beach. Photo: © SAF — Coastal Care.
“The unprecedented plastic waste tide plaguing our oceans and shores, can become as limited as our chosen relationship with plastics, which involves a dramatic behavioral change on our part…” — Claire Le Guern, author of “Plastic Pollution: The Great Plastic Tide” ©-2009.

Levels of plastic contamination has been found in samples of popular seafood such as prawns, oysters and crabs, with the highest content found in sardines, according to University of Queensland research.

“We found polyvinyl chloride—a widely used synthetic plastic polymer—in all samples we tested, but the most common plastic in use today—polyethylene—was the highest concentrate we found,” Ms Ribeiro said…

Newly identified fish nurseries are choked with plastic; Smithsonian Magazine (11-12-2019)
A new study reveals that it’s not just adult sea animals that are getting a gullet full of plastic. Larval fish are inundated with plastic fragments in their nursery habitats and they’re eating those pieces along with their natural food sources…

Scientists predict the size of plastics animals can eat; PhysOrg (03-27-2020)