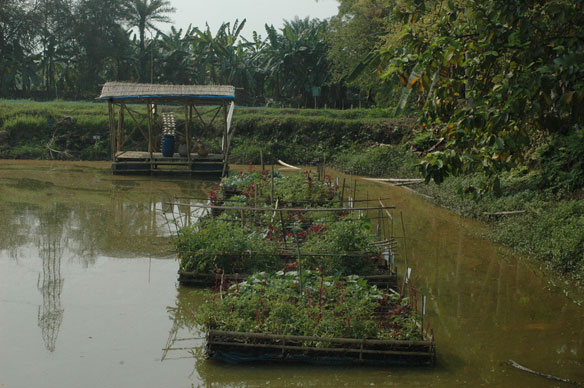 By IRIN, Human News and Analysis

Agriculture accounts for almost a quarter of Bangladesh’s gross domestic product and provides work for 62 percent of the labour force.

Yet in a country frequently flooded and recognized as one of the most vulnerable to climate change, floating vegetable beds have become a fruitful farming alternative. The process is similar to hydroponics, which uses a non-biological growing material like gravel, whereas floating farms use beds made of water hyacinth, bamboo and other aquatic plants.

“The productivity of this farming system is 10 times higher than traditional land-based agricultural production in the southeast of Bangladesh,” said Papon Deb, project manager for the Wetland Resource Development Society (WRDS).

WRDS is one of several NGOs, along with CARE, the International Union for the Conservation of Nature (IUCN), and Practical Action, working around the country to train thousands of farmers.

Bangladesh has had floating farms for hundreds of years, primarily in low-lying areas in the south where land is submerged most of the year.

“Soil-less agriculture evolved through people’s initiative for adaptation to an adverse environment,” said A.H.M. Rezaul Haq, a WRDS researcher. “It has been a part of the indigenous form of cultivation since our forefathers.”

The plant bed, built using several layers of water hyacinth and bamboo, is typically 15-50m in length, 1.5-2m wide and 0.6-0.9m thick. Semi-decomposed aquatic plants are then added to the mix and left to sit for several days before it is ready to be seeded. The beds can be prepared in any depth of water. Farmers can stand on some of them or manoeuvre around them in boats.

The floating beds are anchored to prevent them from drifting out into larger bodies of water, and covered in netting to keep out ducks and other fowl that might eat the crops, said Faruk Ul Islam, head of organizational development for Practical Action, which is training farmers in 600 villages in the north on this practice. Some farmers have to swim out to retrieve beds that have strayed into open water.

Many villagers use the previous year’s decomposed bed as organic fertilizer. These new beds are kept intact thanks to bamboo poles on the sides. 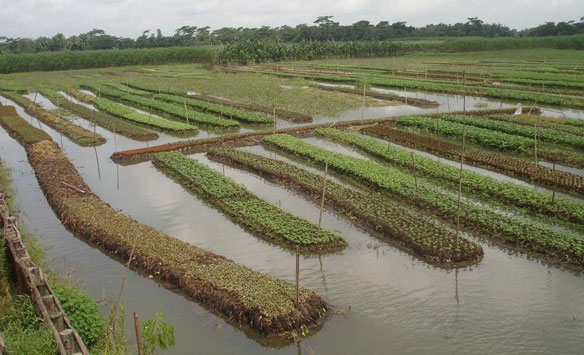 Islam says the floating garden set-up is virtually free, with water and water hyacinth widely available in the waters of Bangladesh. The cost of setting up the floating bed for the growing season might be as little as US$3 for seeds and labour, or as much as $9 if a farmer has to also buy bamboo and netting.

Several research and development organizations are now working with thousands of farmers across the country to implement floating garden projects. While the practice is common in the south, where huge floating farms look like land masses from the air, development workers are now teaching people in northern areas more recently prone to flooding.

The southwestern village of Chandra long ago famed for its mango, jackfruit and dates, is one area where water levels rise more than two metres during the monsoon rains and remain high for 2-3 months.

Now, with this project, there are over 1,000 villagers involved and fewer people are migrating to the city.