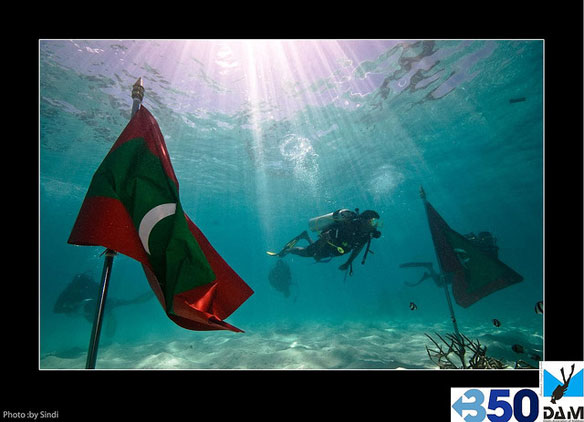 Maldives UnderWater Cabinet Meeting, November 3rd 2009, Male, Maale, Maldives. Mr Mohamed Nasheed President of the Republic of the Maldives makes his way to the entrance to the site. This perhaps, was the 1st time that the National flags were hosted officially underwater in Maldivian history. Captions and Photo source: ©© Divers Association of Maldives

For many of us who live in temperate zones, inland regions and the industrialized West, global warming is a source of anxiety, even terror, and something of an abstraction…

In other parts of the world, though, the issue has a lethal, terrifying urgency. “The Island President,” a new documentary by Jon Shenk (“The Lost Boys of Sudan”), visits one such place, the Maldives…

‘The Island President’: Mohamed Nasheed, Former Maldives Leader, Battles Climate Change, Huffington Post
“Maldives is going underwater. Literally. Due to rising sea levels, studies suggest that the country, a chain of nearly 1,200 islands, could be uninhabitable by 2100. What’s the leader of the lowest lying country on Earth to do? …“you go to the beaches and see that they have to use sandbags to stop the sand eroding. You go to the sea walls and see the water is coming over the walls. It’s a place where climate change is already having an impact.” One challenge for Nasheed was how to communicate the problems currently apparent in the Maldives to countries where the impacts of climate change are not yet as drastic or visible. “Manhattan is an island,” he said. “If the Maldives have difficulties, Manhattan will have difficulties.” What will happen once other nations start to feel the pressure of rising sea levels?