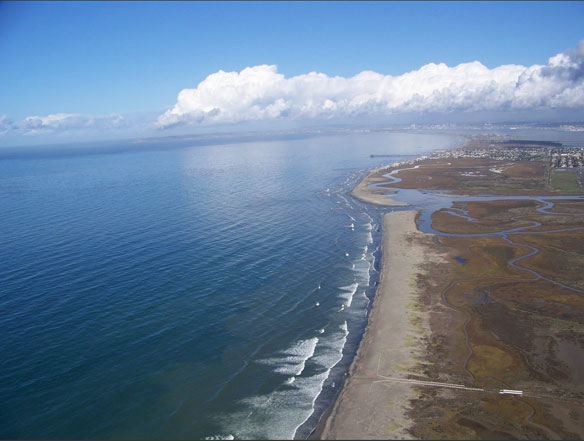 Tijuana River NERR, California. Estuaries are places where rivers meet the sea, providing nursery habitat for fish and shellfish while buffering many coastal communities from the impacts of coastal storms and sea level rise. NOAA

The nation’s 28 National Estuarine Research Reserves (NERR) are experiencing the negative effects of human and climate-related stressors according to a new NOAA research report from the National Ocean Service.

The national study, Climate Sensitivity of the National Estuarine Research Reserve System, points to three East Coast reserves, Sapelo Island NERR in Georgia, ACE Basin NERR in South Carolina and Waquoit Bay NERR in Massachusetts, and the Tijuana River NERR on the California-Mexico border, as the most sensitive to climate change.

“The National Estuarine Research Reserves are uniquely positioned across the U.S. to assess ongoing climate change in our nation’s estuaries which is the degree to which the natural resources and the local communities who depend on them are affected by changing climate conditions,” said Dwight Trueblood, Ph.D. a co-author and NOAA program manager for the study. “This information is important to helping coastal managers and local community leaders make informed decisions about the best ways for coastal communities to adapt to climate change.”

Estuaries are places where rivers meet the sea, providing nursery habitat for fish and shellfish while buffering many coastal communities from the impacts of coastal storms and sea level rise. The climate exposure of each reserve provides first alarm indicators about the effects of climate change on the coastal ecosystems. Ongoing research at each of the reserves provides real-time data about how climate change impacts these important natural resources.

Almost 40 percent of all Americans, or about 123 million people, live in the counties directly along the shoreline and depend on these resources for food, jobs, storm protection, and recreation. Approximately 50 percent, or $6.6 trillion, of the nation’s gross domestic product comes from coastal watershed counties which support more than 51 million jobs.

Researchers determined the extent of relative climate sensitivity in the reserves by looking at five factors: social, biophysical, and ecological sensitivity, and exposure to temperature change and sea level rise.

“Almost 40 percent of all Americans, or about 123 million people, live in the counties directly along the shoreline and depend on these resources for food, jobs, storm protection, and recreation. Approximately 50 percent, or $6.6 trillion, of the nation’s gross domestic product comes from coastal watershed counties which support more than 51 million jobs. ”
— NOAA

High social sensitivity to climate change was indicated where there is higher employment within natural resource-dependent industries, lower per capita income and median home values, higher percentages of minority populations, and a higher percentage of individuals lacking a high school education.

– Social sensitivity to climate change was generally highest in the southern portions of the East and West coasts of the U.S., the Gulf of Mexico and Alaska.

– Temperature change exposure risk was greatest for reserves located in the Great Lakes, Gulf of Mexico, Mid-Atlantic, and Northeast regions of the country, while reserves in the Gulf of Mexico, parts of the Mid-Atlantic, Southeast, California, and Oregon showed the greatest risk of sea level rise exposure.
The study, funded by NOAA’s Climate Program Office, was conducted by a collaborative, interdisciplinary team of investigators from the University of Wisconsin, NOAA’s National Centers for Coastal Ocean Science, and Office of Ocean and Coastal Resource Management working with staff across the National Estuarine Research Reserve System. For a digital copy of the full study is available online.

The National Estuarine Research Reserve System is a network of 28 reserves that serve as “living laboratories” around the U.S. representing unique biogeographically diverse coastal ecosystems. Established under the Coastal Zone Management Act, the reserves are jointly managed by NOAA and the coastal states and territories for long-term research, ecosystems monitoring, education, and coastal stewardship. Through integrated research and education, the reserves help communities develop strategies to deal successfully with coastal resource management issues such as water pollution, habitat restoration and climate change.

Relief for a Parched Delta, New York Times
Thanks to dams that throttled the Colorado and diverted its water to fuel the rise of the American West, the river has effectively ended at the Mexican border. The Colorado delta, once a lush network of freshwater and marine wetlands and meandering river channels and a haven for fish, migrating birds and other wildlife, is largely a parched wasteland…