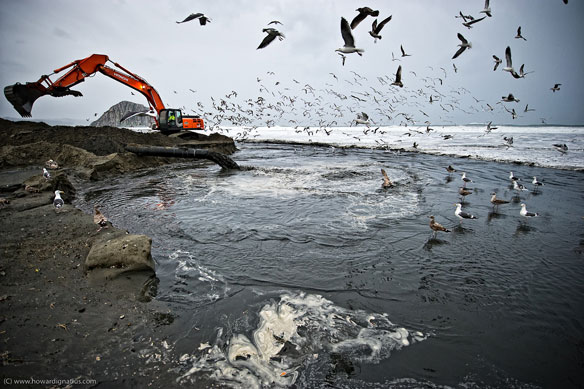 The Army Corps of Engineers Moves Forward With 50-Year Project

After more than a decade of work and research, a project report that aims to keep Bogue Banks beaches nourished for the next five decades has been submitted for final comment.

The proposed project is the first of its kind in the nation. The estimated cost for the initial project construction and the reoccurring nourishment projects over the next 50 years is $266,783,000 and will be split between federal and non-federal monies.

The project will routinely create new sand dunes and berms along Bogue Banks to replace what was lost from storm damage and erosion.

Since 2001, the project cost the county $2,947,503 – much more than anticipated – an amount that was paid entirely from county occupancy tax dollars…

Endless Erosion Battle a Matter of Money, The St Petersburg Tribune (07-21-2014)
A few coastal scientists and fiscally conservative politicians point to the apparent futility of the billions spent across the nation in the past 50 years to stop sand from doing what it’s naturally inclined to do…
An estimated $140 million in today’s dollars has been spent over the years to restore 12.3 million cubic yards of sand at Miami Beach, and New York’s Rockaway Beach has required $216 million and 29 million cubic yards, according to research compiled by The Western Carolina University’s Program for the Study of Developed Shorelines in Cullowhee, North Carolina. “We’re talking about billions of dollars, approaching tens of billions” nationally, said coastal geologist Rob Young

The Folly Of Poorly Executed Beach Renourishment, The Post And Courrier (05-06-2014)
“Folly’s beach $30 million dredging/renourishment project is a fiasco that eclipses the 2009 dredging of live artillery onto the beach during a project in Surf City, N.J…”