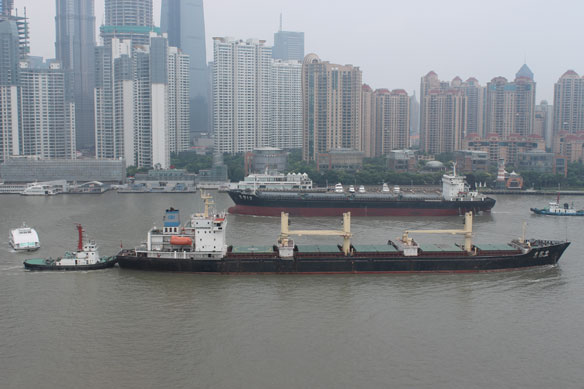 The Prevention and Control of Shipping and Port Emissions in China, NRDC

China is home to seven of the world’s ten busiest container ports. About 26 percent of the world’s containers pass through the top ten Chinese ports every year. Every ship and truck brings pollution along with its cargo, and China is paying a high price for pollution from shipping. In 2010 the country saw an estimated 1.2 million premature deaths caused by ambient air pollution. According to studies conducted in Hong Kong and Shenzhen, shipping is a significant source of these air pollution and health problems, particularly in port cities. Since Chinese port cities are among the most densely populated with the busiest ports in the world, air pollution from ships and port activities likely contributes to much higher public health risks than are found in other port regions.

As detailed in NRDC’s new report, “The Prevention and Control of Shipping and Port Air Emissions in China,” container ships loading their cargo in China and elsewhere in Asia are free to run on dirty bunker fuel, a waste product of traditional fuel-oil processing. Bunker fuel contains a number of pollutants — such as diesel particulate matter, oxides of nitrogen (NOx) and oxides of sulfur (SO2) — that are known to cause cancer, respiratory illness and premature death, as well as exacerbate climate change and damage the oceans…

Read Full Report: “The Prevention and Control of Shipping and Port Emissions in China,” by NRDC