The effects of dam removal are better known as a result of several new studies released this week by government, tribal and university researchers. The scientists worked together to characterize the effects of the largest dam removal project in U.S. history occurring on the Elwha River of Washington State. New findings suggest that dam removal can change landscape features of river and coasts, which have ecological implications downstream of former dam sites.

“These studies not only give us a better understanding of the effects of dam removal, but show the importance of collaborative science across disciplines and institutions,” said Suzette Kimball, acting director of the U.S. Geological Survey.

Five peer-reviewed papers, with authors from the U.S. Geological Survey, Reclamation, National Park Service, Washington Sea Grant, NOAA Fisheries, the Lower Elwha Klallam Tribe, and the University of Washington, provide detailed observations and insights about the changes in the river’s landforms, waters and coastal zone during the first two years of dam removal. During this time, massive amounts of sediment were eroded from the drained reservoirs and transported downstream through the river and to the coast.

One finding that intrigued scientists was how efficiently the river eroded and moved sediment from the former reservoirs; over a third of the 27 million cubic yards of reservoir sediment, equivalent to about 3000 Olympic swimming pools filled with sediment, was eroded into the river during the first two years even though the river’s water discharge and peak flows were moderate compared to historical gaging records.

This sediment release altered the river’s clarity and reshaped the river channel while adding new habitats in the river and at the coast. In fact, the vast majority of the new sediment was discharged into the coastal waters of the Strait of Juan de Fuca, where the river mouth delta expanded seaward by hundreds of feet.

“The expansion of the river mouth delta is very exciting, because we are seeing the rebuilding of an estuary and coast that were rapidly eroding prior to dam removal,” said USGS research scientist and lead author of the synthesis paper, Dr. Jonathan Warrick.

Although the primary goal of the dam removal project is to reintroduce spawning salmon runs to the pristine upper reaches of the Elwha River within Olympic National Park, the new studies suggest that dam removal can also have ecological implications downstream of the former dam sites. These implications include a renewal of the sand, gravel and wood supplies to the river and to the coast, restoring critical processes for maintaining salmon habitat to river, estuarine and coastal ecosystems.

“These changes to sediment and wood supplies are important to understand because they affect the river channel form, and the channel form provides important habitat to numerous species of the region,” stated USGS research scientist and river study lead author, Dr. Amy East.

The final stages of dam removal occurred during the summer of 2014. Some sediment erosion from the former reservoirs will likely continue. The Elwha Project and research teams are continuing to monitor how quickly the river returns to its long-term restored condition.

“We look forward to seeing when the sediment supplies approach background levels,” said Reclamation engineer and co-author, Jennifer Bountry, “because this will help us understand the length of time that dam removal effects will occur.”

The five new papers can be found in Elsevier’s peer-reviewed journal, Geomorphology, and they focus on the following topics of the large-scale dam removal on the Elwha River, Washington (web-based publication links using digital object identifiers, doi, are provided in parentheses):

Fish return to undammed Elwha River
A project to remove two hydroelectric dams from the Elwha River in Washington state is bringing benefits for local wildlife. But the fish are not home free yet.

Underwater Ecosystem Inundated by Sediment Plume, Elwha River
Scuba-diver scientists from the U.S.G.S, with support teams from the U.S. EPA, the Lower Elwha Klallam Tribe, and Washington Sea Grant, are returning to the mouth of Washington’s Elwha River this week to explore and catalogue the effect of released sediment on marine life following the nation’s largest dam removal effort.

The Condit Dam Breach
For 95 years, the 125-foot high Condit Dam in rural Washington State held back the White Salmon River. In an historic effort, the dam was dramatically breached to restore, for the first time in a century, the waterway to fish and other aquatic organisms, as well as the birds and mammals that rely on them. The dam removal comes just weeks after dismantling began on the Elwha Dam a few hours to the north. 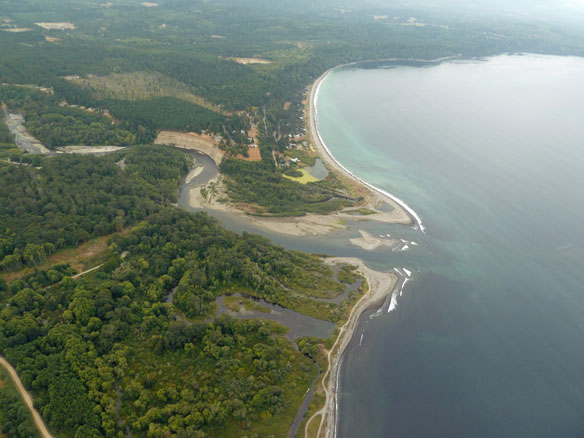