That ‘More Realistic’ Sea-Level Report? Not Good News for NC 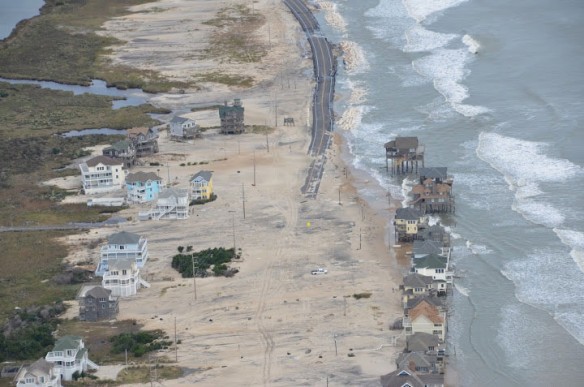 “There seems to be a grand misimpression that a new sea-level rise report released by the Science Panel of the Coastal Resources Commission is different from a report released in 2010.

Any suggestion that the political establishment somehow chastened scientists into producing a “more realistic” report is nonsense. The new report uses the same data sources, plus a few new ones, and the same approach. It even presents the predicted acceleration of sea level rise toward the middle of the century. (Full disclosure, I was an author on the first report but stepped down from the panel before the second report was completed.)

Yes, it is true that the new report includes different projections for the northern and southern North Carolina coast because northeastern North Carolina is subsiding. But the first report clearly acknowledged this difference. Why did the first report choose to use the higher northern Outer Banks rate for its SLR projection? Because the Science Panel was directed by the CRC to report only one number in that report. Had the CRC requested multiple rates, it would have gotten them.

The real lesson from this exercise is that five years of additional data haven’t changed the basic forecasts. Local officials may breathe easier having to look only 30 years down the road, but 6 to 8 inches of sea-level rise are no reason to celebrate…”