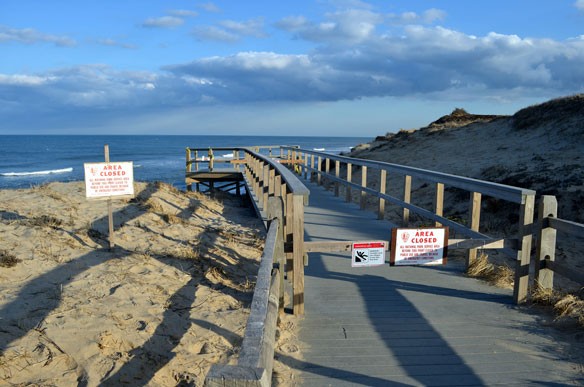 65 acres of Massachusetts coastline is carried away every year by raging storms and rising seas.

That’s not a problem unless we build a house on the beach. Today, 40 percent of the commonwealth’s 1,500-mile shoreline is residentially occupied.

From 1978 to 2013, 41 federally declared storm disasters occurred in coastal Massachusetts, with damages totaling $600 million. Today, the replacement cost for all buildings and their contents exposed to the state’s eroding shore is over $7 billion.

In an attempt to stem the tide of erosion, we have armored one-third of that coast with rocks and walls, building a false sense of security against Neptune’s relentless onslaught…

How Your Taxes Help Inflate The Value Of Coastal Properties Threatened By Climate Change, ThinkProgress (06-05-2015) 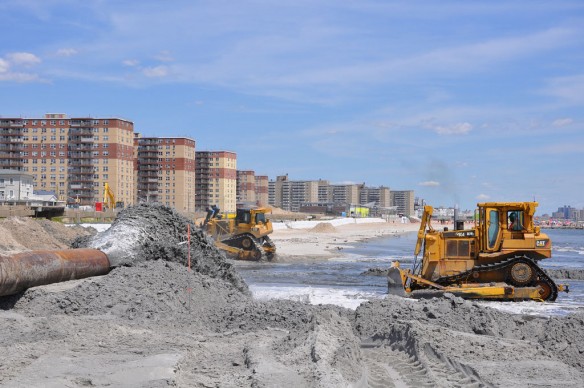 Sand placement activities, at Rockaway Beach in Queens, NY as part of a project placing roughly 3.5 million cubic yards onto the beach. Photo source: ©© U.S Army Corps of Engineers.
“Beach nourishment projects like this have become commonplace along the US East and Gulf Coasts. These projects have immediate environmental impacts through burial of nearshore habitat and increased turbidity during project placement.The cumulative environmental impacts of doing this repeatedly on the same beach while conducting projects from Maine to Texas is unknown. But, we should be concerned. ” —Robert S. Young, PhD, Director, Program for the Study of Developed Shorelines, Professor, Coastal Geology, Western Carolina University