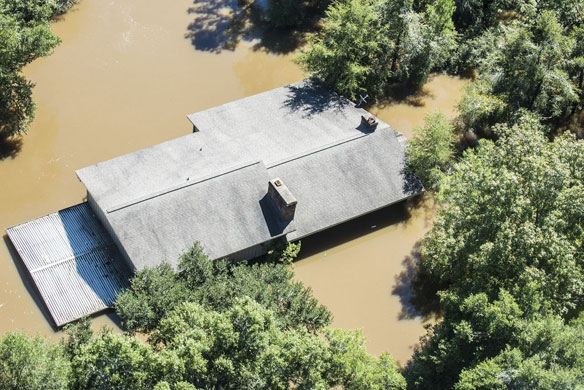 Thousands of Homes Keep Flooding, Yet They Keep Being Rebuilt Again 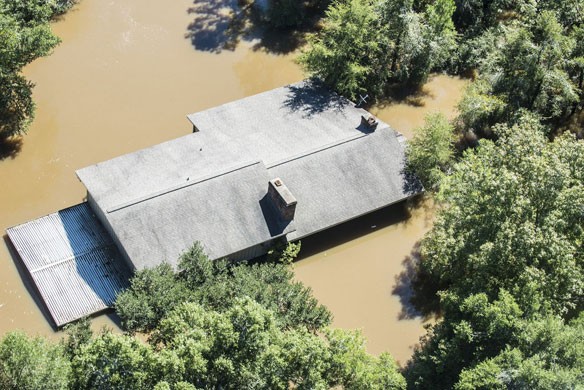 Can you imagine living in a property that has flooded 10 times? How about 20 times? It’s hard to fathom enduring that kind of situation, yet owners of 2,109 properties across the United States experience just that. Not only has each of these properties flooded more than 10 times, but the National Flood Insurance Program has paid to rebuild them after each flood.

These properties—and more than 30,000 others that have flooded multiple times—illustrate the current problems of the National Flood Insurance Program and also provide some insights into how challenging it will be to cope with sea level rise, flooding due to extreme weather, as well as other impacts of climate change. It is anticipated that between 4 and 13 million people’s homes could be inundated due to sea level rise by 2100…

Thousands of Homes Keep Flooding, Yet They Keep Being Rebuilt Again; Yale E360 (08-29-2016)
The new data illustrates the serious problems facing the nation’s flood insurance program. The National Flood Insurance Program (NFIP), which currently provides policies for more than 5 million American homes, is $23 billion in debt following a string of major natural disasters over the last decades, including as Hurricanes Katrina and Sandy…

Rebuilding the Shores, Increasing the Risks, The New York Times (04-2013)

“Why Americans Are Flocking To Their Sinking Shores Even As The Risks Mount – PART II: Against The tide,” From the: “Water’s Edge: the Crisis Of Rising Sea Levels – PART II,” A Report By Reuters (09-2014)

After Hurricane Sandy, One Man Tries To Stop The Reconstruction, Outside Magazine (10-2013)

La Faute-sur-Mer and l’Aiguillon-sur-Mer beaches, Vendée, France; By Claire Le Guern
The very last day of February 2010. It is 4:00 am. Howling winds, whipping rains, infuriated seas, and eight meter high (26 feet) crashing waves, are muffling the desperate cries for help…4:00 am… Twenty nine human lives are being swept away, drowned in the frigid and salty ocean waters. They were in their sleep, in their beds, in the comfort of their home. They did not understand, they could not react, most of them too old, too frail, or much too little to run for safety and climb on the rooftops, like most of the survivors did…
When daylight unveiled the disaster, French Prime Minister François Fillon held an emergency cabinet meeting and afterward called the storm a “national catastrophe.” French President Nicolas Sarkhozy, declared: “We have to find out how families in France in the 21st-century can be surprised in their sleep and drowned in their own houses.” Mr. Sarkozy added, “We have to shed light as urgently as possible on this unacceptable and incomprehensible tragedy.”
As much as this tragedy is utterly unacceptable, it is all too comprehensible and sadly, previously announced by warnings from many scientists, locals, and even more relevantly by an official 2008 report from the Vendée Equipment Department, DDE. The risks of marine submersion were known to the Vendée DDE, which strongly addressed and questioned coastal safety, citing in particular the fragile sea walls in L’Aiguillon-sur-Mer and La Faute-sur-Mer, as well as their existing location and development in flood-prone areas. “There is no doubt about the vulnerability of the Vendée coast to marine submersion”…