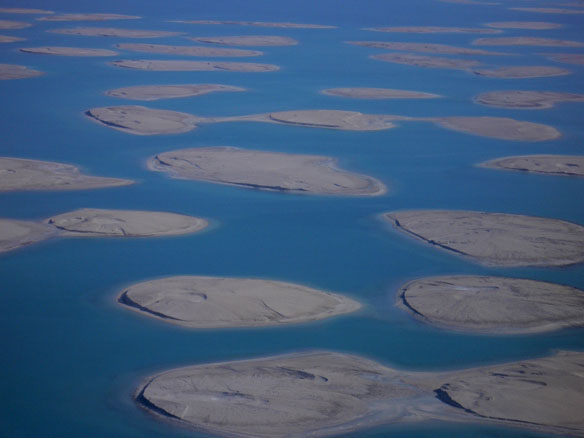 Dubai is growing again, and again it’s building into the sea…

A Picture of Earth Through Time
In the mid-1980s, when the Timelapse images begin, Dubai was a small desert city of about 300,000 people, overshadowed by nearby Abu Dhabi, the capital of the United Arab Emirates. What growth Dubai had experienced was mostly recent; in the 1950s it was little more than a village, with pearl diving its chief industry. Today, Dubai’s population exceeds 2.1 million, and the metropolis has asserted itself as the financial center of the Middle East. Explore a global timelapse of our planet, constructed from Landsat satellite imagery. Witness two palm trees and a map of the world appear as islands off the coast of Dubai.

Sand Wars, An Investigation Documentary, By Multi Award-Winning Filmmaker Denis Delestrac (©-2013)
Is sand an infinite resource? Can the existing supply satisfy a gigantic demand fueled by construction booms? What are the consequences of intensive beach sand mining for the environment and the neighboring populations…? This investigative documentary takes us around the globe to unveil a new gold rush and a disturbing fact: the “Sand Wars” have begun…
As of 2011-2012, when investigative filmmaker Denis Delestrac and team, were first collecting and unveiling sand mining datas and information from the professionals involved, the Sand business was estimated to be a $70 billion industry, worldwide..—Denis Delestrac (©-2013).