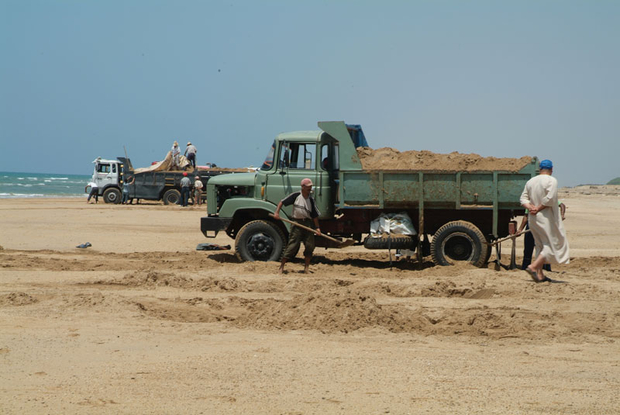 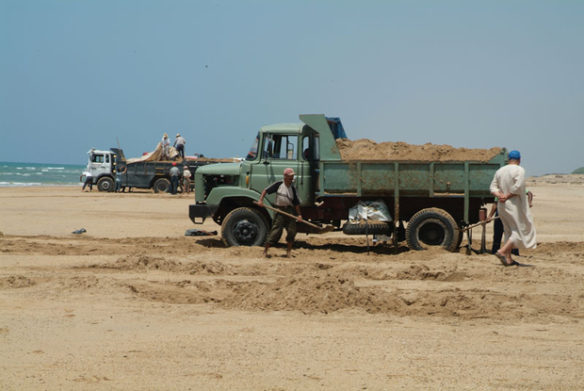 Illegal beach sand mining, near Tangier, Morocco. Photograph: © SAF — Coastal Care.
As of 2011-2012, when investigative filmmaker Denis Delestrac and team, were first collecting and unveiling sand mining datas and information from the professionals involved, the Sand business was estimated to be a $70 billion industry, worldwide…!—Denis Delestrac (©-2013)
“Sand is the second most consumed natural resource, after water. The construction-building industry is by far the largest consumer of this finite resource. The traditional building of one average-sized house requires 200 tons of sand; a hospital requires 3,000 tons of sand; each kilometer of highway built requires 30,000 tons of sand… A nuclear plant, a staggering 12 million tons of sand…” Captions by: “Sand Wars” Multi Award-Winning Filmmaker Denis Delestrac (©-2013).

Investigation launched into allegations that sand in Gran Canaria resort was sourced from Africa’s last colony, in breach of international law…

The world is running out of sand; The New Yorker (05-29-2017)
It’s one of our most widely used natural resources, but it’s scarcer than you think…

The Sand Thieves: World’s Beaches Become Victims of Construction Boom. It’s not Just Cape Verde; Spiegel International (10-02-2014)
Sand is becoming so scarce that stealing it has become an attractive business model. With residential towers rising ever higher and development continuing apace in Asia and Africa, demand for the finite resource is insatiable…