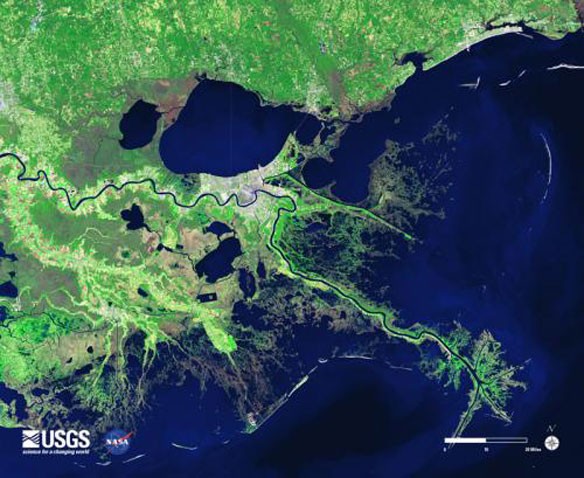 A satellite image of the lower Mississippi River (winding dark line) shows that south of New Orleans (white, at center) the wetlands (green) are severely tattered, allowing hurricanes and other storms to push surges of water from the surrounding Gulf of Mexico right into the city, largely unimpeded. Image source: USGS – NASA.

Scientists have discovered that the seafloor from the Mississippi River Delta to the Gulf of Mexico is eroding like the land loss that is occurring on the Louisiana coast.

During the 20th century, thousands of dams were built on Mississippi River tributaries stopping the flow of fine silt, clay and other sediment from reaching the delta and seafloor to offset erosion.

Without this sediment, land – in the form of wetlands and the seafloor – is lost, which threatens offshore and inland infrastructure in the face of waves, hurricanes and surge, or flooding, from storms. Land loss also affects marine plants and animals as well as how pollution is absorbed and broken down. In this new comprehensive study, scientists have mapped the retreat of the seafloor from the Mississippi River Delta into the Gulf of Mexico for the first time. This research was published recently in the journal Marine Geology…