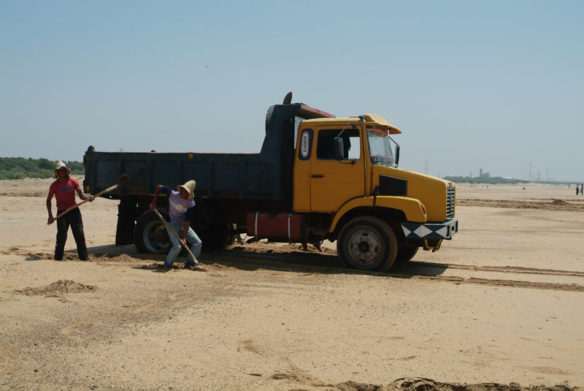 Illegal beach sand mining. Photograph: © SAF — Coastal Care
As of 2011-2012, when investigative filmmaker Denis Delestrac and team, were first collecting and unveiling sand mining datas and information from the professionals involved, the Sand business was estimated to be a $70 billion industry, worldwide…!—Denis Delestrac (©-2013)
“Sand is the second most consumed natural resource, after water. The construction-building industry is by far the largest consumer of this finite resource. The traditional building of one average-sized house requires 200 tons of sand; a hospital requires 3,000 tons of sand; each kilometer of highway built requires 30,000 tons of sand… A nuclear plant, a staggering 12 million tons of sand…” Captions by: “Sand Wars” Multi Award-Winning Filmmaker Denis Delestrac (©-2013).