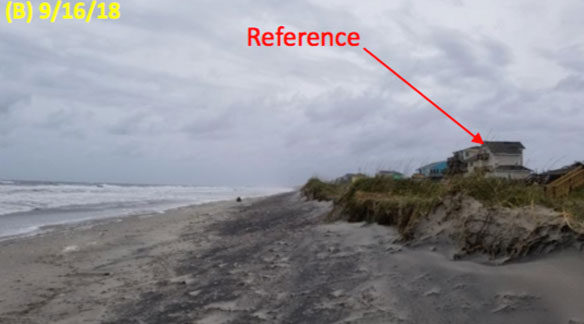 Florence becomes the storm of record (twice) for high water level at the Beaufort tide gage. See before and after photo slideshow…

With storm surging warnings along the North Carolina coast proliferating, The Weather Channel used a tool known as “immersive mixed reality technology” video, to show viewers how that surge might affect a typical neighborhood in a “reasonable worst-case scenario…”

How Did The Weather Channel Make This Hurricane Graphic? Inside Edition Youtube (09-14-2018) 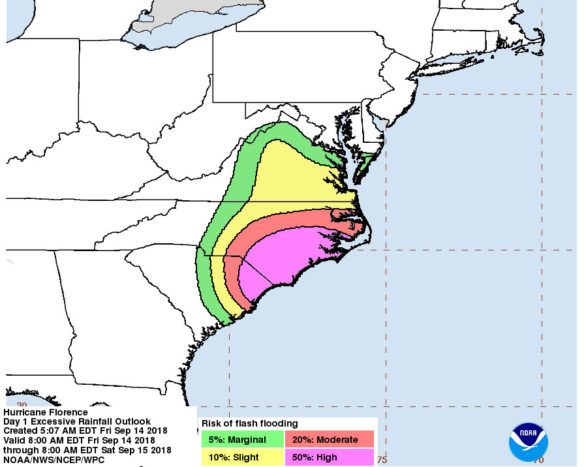 Hurricane Florence made landfall near Wrightsville Beach, North Carolina, at about 7:15 a.m., the National Hurricane Center said. Life-threatening storm surge and hurricane-force winds were occurring along the North Carolina coast. “Catastrophic” freshwater flooding is expected over portions of the Carolinas… 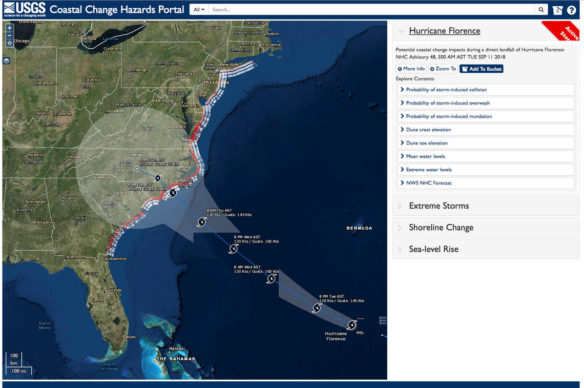 Hurricane Florence, a dangerous Category 4 hurricane, is very likely to cause beach erosion along about three-quarters of the North Carolina coast as it makes landfall, and to overwash about 15 percent of that state’s dunes, with less extensive erosion in nearby states, say coastal change experts at the U.S. Geological Survey. However, the storm may cause continuing damage to Mid-Atlantic beaches and dunes if it moves very slowly after landfall, as forecasters expect.

The USGS Coastal Change Hazards storm team is making two types of coastal erosion forecasts that, taken together, describe the range of effects that Florence may have on the coast. The first approach uses a computer model that analyzes coast-wide beach impacts to predicts the probabilities of dune erosion and overwash for a wide area. The second approach, the Total Water Level and Coastal Change Forecast Viewer, is an experimental model that focuses on specific locations over longer periods, forecasting the timing and magnitude of elevated water levels at the shoreline.

“Our forecast is for Florence to cause a long-lasting coastal erosion process with more than one set of impacts to the Mid-Atlantic beaches,” said research oceanographer Kara Doran, leader of the USGS Coastal Change Hazards Storm Team based in St. Petersburg, Florida.

“As Florence makes landfall its storm surge will cause some erosion at the base of the dunes from Georgia through Virginia. In most places it is not likely to overtop that protective row of dunes and cause damage to the communities and natural areas behind them – at least not at first,” Doran said. “But if the storm lingers, and if high surge, higher than normal tides and strong waves persist over a period of days, the likelihood increases that the dunes could be overtopped and flooding could occur behind them.”

The USGS Coastal Change Hazards storm team is making two types of coastal erosion forecasts that, taken together, describe the range of effects that Florence may have on the coast. The first approach predicts the probabilities of dune erosion and overwash for a wide area. The second approach forecasts the timing and magnitude of elevated water levels at the shoreline in the Total Water Level and Coastal Change Forecast Viewer.

The prediction of Florence’s effects at landfall are based on results of the USGS Coastal Change Forecast model, which has been in use since 2011, and is continually being improved. The Coastal Change Forecast model starts with the National Hurricane Center’s storm surge predictions and National Oceanic and Atmospheric Administration wave forecast models as input. The USGS model then adds detailed information about the beach slope and dune height to predict how high waves and surge will move up the beach, and whether the protective dunes will be overtopped, at high resolution for all the areas likely to be affected by storm-tides from Hurricane Florence. Because the projections are based on storm-surge forecasts, they change each time the storm surge forecast is updated.

Beach erosion is only the first level of damage a major storm can cause. As waves and surge reach higher than the top of the dune, overwash occurs, often transporting large amounts of sand across coastal environments, depositing sand inland and causing significant changes to the landscape. Overwash is currently predicted as very likely for 20 percent of beaches in Virginia, 15 percent in North Carolina, 12 percent in South Carolina, and three percent in Georgia.

Inundation, the most severe impact, occurs when beaches and dunes are completely and continuously submerged by surge. Inundation is forecast as very likely for one percent of North Carolina beaches.

The public can view a real-time map of these estimates on the USGS’ Coastal Change Hazards Portal. Emergency managers can use the coastal change forecast to help identify locations where coastal impacts might be the most severe, such as where roads will be overwashed by sand or where it’s roads might go underwater because of storm surge and large waves.

The most up-to-date forecasts for potential coastal change predictions are available on the National Assessment of Storm-Induced Coastal Change Hazards – Hurricane Florence page.

The Total Water Level and Coastal Change Forecast Viewer is a new predictive tool and is considered experimental. For that reason, it is not meant as a guide to making important decisions about protecting lives and property. However, its time-dependent outlook gives a fuller view of a storm’s long-range effects on coastal resources. 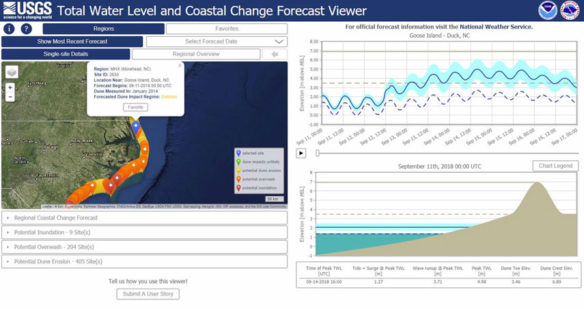 While the final projections for Hurricane Florence will continue to change, Florence is forecasted to remain a powerful storm for several days and is likely to damage many parts of the Mid-Atlantic coastline.

The USGS continues to take all appropriate preparedness and response actions as Hurricane Florence approaches the Mid-Atlantic coast. People potentially affected by the storm can visit http://www.ready.gov/ or http://www.listo.gov/ for tips on creating emergency plans and putting together an emergency supply kit.

In 2012, the state whose low-lying coast lies in the path of Hurricane Florence reacted to a prediction of catastrophically rising seas by banning policies based on such forecasts…

The State That ‘Outlawed Climate Change’ Accepts Latest Sea-Level Rise Report; WUNC (05-05-2015)
Five years ago, the Science Panel of the North Carolina Coastal Resources Commissioner presented a report outlining that sea levels along the coast could rise as much as 39 inches over the next 100 years. The General Assembly passed a law forbidding communities from using this report to pass new rules. Now, almost three years later, the scientists have come back with a new report, but it is hardly complete and universal… 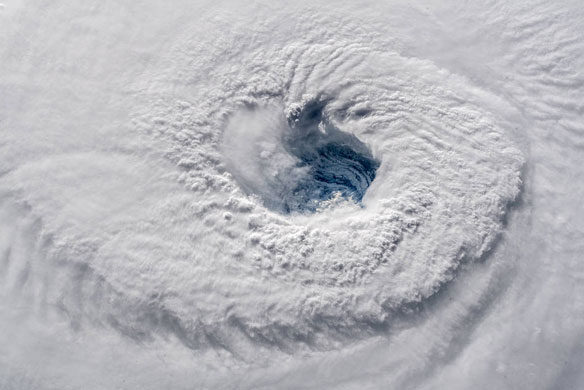 “Ever stared down the gaping eye of a category 4 hurricane? It’s chilling, even from space,” says European Space Agency astronaut Alexander Gerst, who is currently living and working aboard the International Space Station as a member of the Expedition 56 crew.
Image and captions: NASA

Even for a major hurricane, Florence is a beast like no other.

A perfect storm of unfortunate circumstances means Florence could deal a devastating blow to the Southeast.

And in the 29 years since Hurricane Hugo struck, the population of the coastal Carolinas has skyrocketed…

Staring Down Hurricane Florence, VIDEO, NASA (09-12-2018)
A high-definition video camera outside the space station captured stark and sobering views of Hurricane Florence, a Category 4 storm. The video was taken on Tuesday as Florence churned across the Atlantic in a west-northwesterly direction with winds of 130 miles per hour. The National Hurricane Center forecasts additional strengthening for Florence before it reaches the coastline of North Carolina and South Carolina early Friday, Sept. 14. 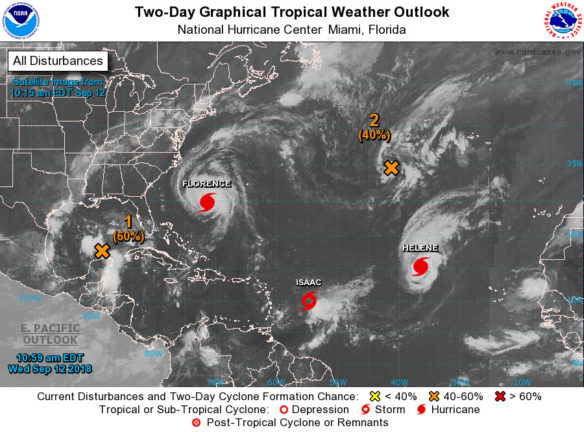 Hurricane response crews from the U.S. Geological Survey are installing storm-tide sensors at key locations in Puerto Rico from Cabo Rojo to Naguabo in advance of Hurricane Isaac. Under a mission assignment from the Federal Emergency Management Agency, the USGS plans to deploy about 20 sensors along the island’s coast

Storm surge is among the most dangerous natural hazards unleashed by hurricanes, with the capacity to destroy homes and businesses, wipe out roads, bridges, water and sewer systems, and profoundly alter coastal landscapes. The USGS has experts on these hazards, state-of-the-science computer models for forecasting coastal change, and sophisticated equipment for monitoring actual flood and tide conditions.

The sensors being installed to measure Hurricane Isaac’s storm tide are housed in vented steel pipes a few inches wide and about a foot long. They are being installed on bridges, piers, and other structures that have a good chance of surviving the storm. The information the sensors collect will help define the depth and duration of a storm surge, as well as the time of its arrival and retreat. That information will help public officials assess storm damage, discern between wind and flood damage, and improve computer models used to forecast future floods. Information on the storm-tide sensor deployment and the incoming data will be available on the USGS “Flood Event Viewer” at https://stn.wim.usgs.gov/FEV/#IsaacSep2018.

In addition to storm-tide sensors in Puerto Rico, one rapid deployment gauge will also be installed on St. Thomas in the U.S. Virgin Islands. These specialized gauges can be quickly installed on bridges to provide real-time information on water levels to provide critical information to the National Weather Service, FEMA and other USGS partners involved in issuing flood and evacuation warnings and in coordinating emergency responses to communities.

The USGS studies the impacts of hurricanes and tropical storms to better understand potential impacts on coastal areas. Information provided through the sensor networks provides critical data for more accurate modeling and prediction capabilities and allows for improved structure designs and response for public safety.

As the USGS continues to take all appropriate preparedness and response actions in response to Hurricane Isaac, those ­­­in the storm’s projected path can visit www.ready.gov or www.listo.gov for tips on creating emergency plans and putting together an emergency supply kit. 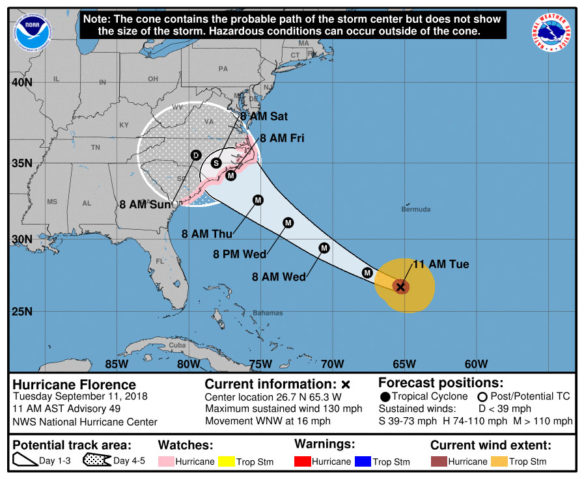 More than 1 million people face mandatory evacuation orders Tuesday in coastal areas of Virginia, North Carolina and South Carolina, as one of the strongest hurricanes to churn toward the eastern seaboard in decades — a Category 4 storm that may approach Category 5 strength — nears shore… 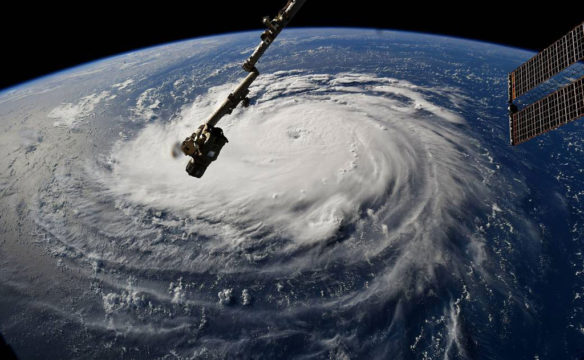 The National Weather Service at noon ET upgraded Florence to a Category 4 storm, meaning it is capable of creating “catastrophic” damage.

The National Hurricane Center forecasts Florence to hit the shore late Thursday night or early Friday morning. Swells up to 15 feet could batter the coast…