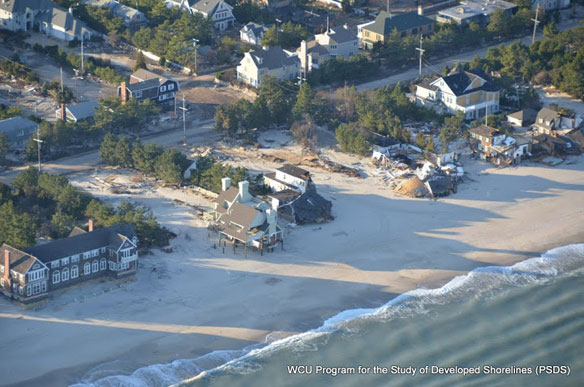 Americans Back Preparation for Extreme Weather and Sea Level Rise

Images told the story: lower Manhattan in darkness, coastal communities washed away, cars floating in muck. Superstorm Sandy, a harbinger of future extreme weather intensified by climate change, caught the U.S. off guard this past October. Unprepared for the flooding and high winds that ensued, the East Coast suffered more than $70 billion in property damages and more than 100 related deaths. Going forward, Americans face a stark choice: prepare and invest now to minimize the impact of disasters such as Sandy, or deal with storms and rising sea levels when they occur…

We Need to Retreat From the Beach, by Orrin H. Pilkey
As ocean waters warm, the Northeast is likely to face more Sandy-like storms. And as sea levels continue to rise, the surges of these future storms will be higher and even more deadly. We can’t stop these powerful storms. But we can reduce the deaths and damage they cause… An Op Ed by Orrin H. Pilkey.

Sandy Reminds Us of Coastal Hazards, by Robert Young
Hurricane Sandy will almost certainly join the pantheon of “costliest storms in history.”The impacts of the storm have been felt as far inland as Toronto, Ontario and coastal erosion and flooding affected beaches from South Carolina to southern Massachusetts…