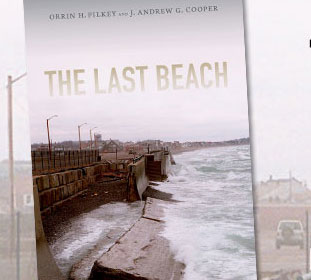 The Last Beach is an urgent call to save the world’s beaches while there is still time. 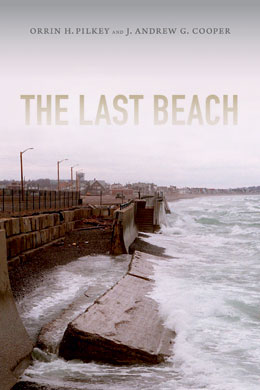 The geologists Orrin H. Pilkey and J. Andrew G. Cooper sound the alarm in this frank assessment of our current relationship with beaches and their grim future if we do not change the way we understand and treat our irreplaceable shores.

Combining case studies and anecdotes from around the world, they argue that many of the world’s developed beaches, including some in Florida and in Spain, are virtually doomed and that we must act immediately to save imperiled beaches.

After explaining beaches as dynamic ecosystems, Pilkey and Cooper assess the harm done by dense oceanfront development accompanied by the construction of massive seawalls to protect new buildings from a shoreline that encroaches as sea levels rise.

They discuss the toll taken by sand mining, trash that washes up on beaches, and pollution, which has contaminated not only the water but also, surprisingly, the sand.

Acknowledging the challenge of reconciling our actions with our love of beaches, the geologists offer suggestions for reversing course, insisting that given the space, beaches can take care of themselves and provide us with multiple benefits.

Orrin H. Pilkey, deemed “America’s foremost philosopher of the beaches,” by the New York Times, is James B. Duke Professor Emeritus of Geology at the Nicholas School of the Environment at Duke University, and Founder and Director Emeritus of the Program for the Study of Developed Shorelines, based at Western Carolina University. Pilkey is a coauthor (with Keith C. Pilkey) of Global Climate Change: A Primer, published by Duke University Press, and of twenty books in the Press’s Living with the Shore series, edited by Pilkey and William J. Neal. The Orrin Pilkey Marine Science and Conservation Genetics Center opened at the Duke Marine Lab in Beaufort, North Carolina, in 2013. Pilkey lives in Hillsborough, N.C.

J. Andrew G. Cooper is Professor of Coastal Studies in the School of Environmental Sciences at the University of Ulster. He and Pilkey are coauthors (with William J. Neal and Joseph T. Kelley) of The World’s Beaches: A Global Guide to the Science of the Shoreline and coeditors of Pitfalls of Shoreline Stabilization. Well known for his advocacy of nonintervention on shorelines and his work on beaches and coasts worldwide, Cooper lives in the town of Coleraine in Northern Ireland.

A clarion call for a change of policy that prioritizes the preservation of beaches over property rights.
In this follow-up to The World’s Beaches: A Global Guide to the Science of the Shoreline (2011), Pilkey (Emeritus, Geology/Duke Univ.) and Cooper (Environmental Sciences/Univ. of Ulster) warn that shoreline development is already endangering our beaches.
The authors deliver a message to be heeded: “We must view the beach as a sacred and resilient yet strangely fragile natural environment to be protected at all costs.”—Kirkus Review.

The world’s beaches are being washed away as coastal developments increase in size and engineers build ever higher sea walls to defend against fierce winter storms and rising sea levels, according to two of the worlds’ leading marine geologists, Andrew Cooper and Orrin Pilkey, in a new book, The Last Beach…—Guardian UK, Book Review.

Beaches, whether sandy or stony, are very much part of summer, but if Orrin Pilkey and Andrew Cooper’s The Last Beach is right, the traditional seaside may soon be a thing of the past. The Last Beach shows that Westerners should not get smug about their future because development and house prices frequently trump environmental good sense.—New Scientist, Book Review.

Welfare with an Ocean view: The Last Beach is organized into chapters laying out the various ways in which humans have maimed the world’s beaches. There are a lot. The Last Beach is determinedly international—it dives into the full range of challenges facing beaches around the world.—Washington Monthly, Book Review, March-May 2015.

In the new genre of science-based apocalyptic non-fiction that serves to open our eyes to the effects of the Anthropocene – the recently designated geological era in which it can be concluded that our species is having an unalterable effect on our planet – Orrin Pilkey and Andrew Cooper’s book is a terrifying addition to a growing and doomy bookshelf. Pilkey, professor emeritus of geology at Duke University, and Cooper, professor of coastal studies at the University of Ulster, have created a wide-ranging survey of the state of our beaches – the essential and incredibly fragile interface between us and the sea.—Philip Hoare, Times Higher Education, Book Review.

We can have our beachfront properties — our Miami high-rises, our Hamptons mansions, our Jersey boardwalks — or we can have our beaches. But as geologist and Duke University emeritus professor Orrin Pilkey and J. Andrew G. Cooper, a professor of coastal studies at the University of Ulster, have been arguing for decades now, we can’t have both.—Salon, Book Review.

In a new book, “The Last Beach” (Duke University Press, $19.95, trade paperback) Pilkey and follow geologist J. Andrew G. Cooper of the School of Environmental Sciences at the University of Ulster, warn that we will lose the beaches we have long enjoyed if we do not end our insistence on building whatever we want right up to the shoreline.— The Herald Sun, Books roundup: Saving the beaches