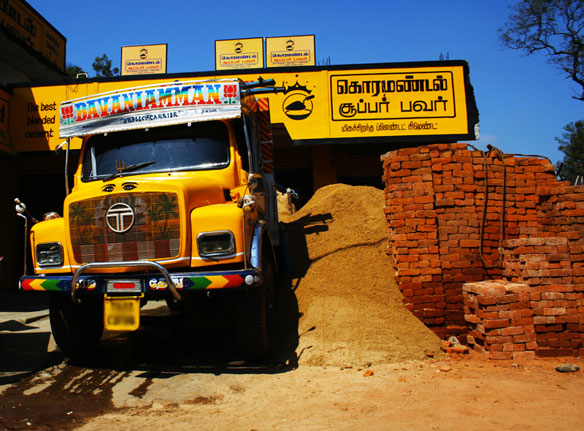 Lorry, sand and bricks. Chennai, Tamil Nadu, India. Tamil Nadu is one of the 28 states of India. Chennai, formerly known as Madras, is its capital. Photo source: ©© Swamysk
As of 2011-2012, when investigative filmmaker Denis Delestrac and team, were first collecting and unveiling unpublished sand mining datas and information from the professionals involved, the Sand business was estimated to be a $70 billion industry, worldwide…!—Denis Delestrac (©-2013)
“Sand is the second most consumed natural resource, after water. The construction-building industry is by far the largest consumer of this finite resource. The traditional building of one average-sized house requires 200 tons of sand; a hospital requires 3,000 tons of sand; each kilometer of highway built requires 30,000 tons of sand… A nuclear plant, a staggering 12 million tons of sand…” Captions by: “Sand Wars” Multi Award-Winning Filmmaker Denis Delestrac (©-2013).

As the saga of illegal beach sand mining drags on in the Madras high court, an interim order has finally called into question the role, or the lack thereof, played by the Centre over two decades in monitoring, curbing and enforcing laws preventing the illegal mining of beach sands from Tamil Nadu’s shores…

This Journalist Is Going Through Hell For Exposing Illegal Beach Sand Mining In Tamil Nadu; The Huffington Post Int. (03-17-2017)
All hell has broken loose since journalist Ravishankar published a four-part series on illegal beach sand mining along the Tamil Nadu coast…