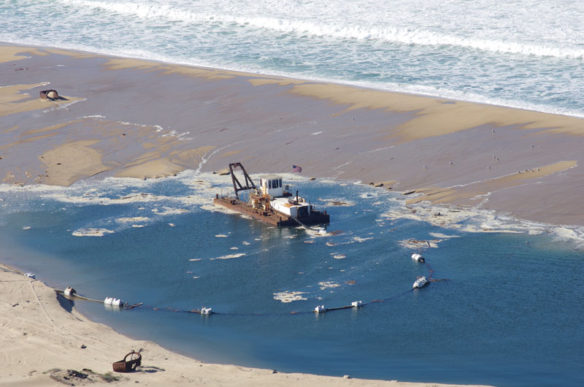 Monterey Bay. CEMEX extracted about 200,000 yds3 of sand from this back beach pond every year. Photograph courtesy of: © Gary Griggs
“The portions of southern Monterey Bay shoreline have the highest erosion rates in the state. None of the documents reviewed for this report can offer any explanation for these anomalously high erosion rates beyond the sand extraction from the littoral zone at the Lapis Mine. The overwhelming evidence leads me to conclude that continued sand mining activities have led to a substantial sand deficit in southern Monterey Bay. This sand deficit is driving these anomalously high rates of coastal erosion. In order to grapple with the serious erosion problems in southern Monterey Bay, I recommend that the City of Marina pursue options to stop beach sand mining activities at the Lapis facility…” — Robert S. Young, PhD, PG,

The State Lands Commission owns the sand in the public trust and approves or rejects requests to sand-mine.Hoping to persuade the Commission and courts to stop the mining, the Baykeeper cited studies by its own researchers and others that show that sand at the bottom of the Bay drifts to nearby Ocean Beach.

An attorney for Hanson Marine Operations, Christian Marsh, said, “There is nothing in those studies that says that there is a direct causal link between sediment removal in the bay and erosion at Ocean Beach, which is occurring for a whole multitude of factors.”

The justices ruled the sand mining increase is allowed. It’s a setback for the San Francisco Baykeeper.

“It’s 1.5 million cubic yards of sand, which doesn’t mean much to many people. But that means it’s 4 times the amount of sand that will actually enter San Francisco Bay from upstream forces,” said SF Baykeeper’s attorney Erica Maharg…

With the impending shutdown of the Cemex mine in Marina, USGS takes stock of the local sand supply (09-20-2018)

Controversial beachfront sand mining operation along Monterey Bay to close; The Mercury News (06-27-2017)
The last coastal sand mine in the United States, a facility on Monterey Bay that scientists say has caused significant erosion of beaches in the area, will close in three years under a settlement agreement announced Tuesday with California officials…

Concrete, or Beaches? World’s Sand Running Out As Global Construction Booms; The Ecologist (05-09-2017)
A crucial component of concrete, sand is vital to the global construction industry…