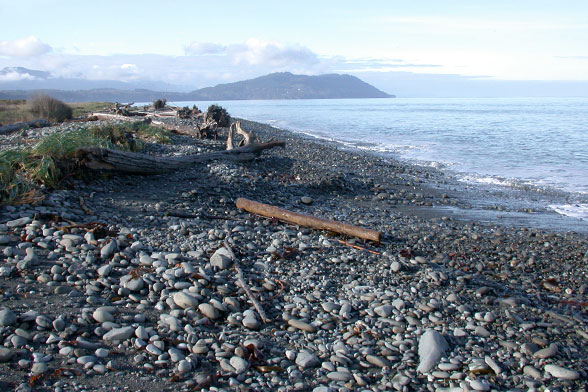 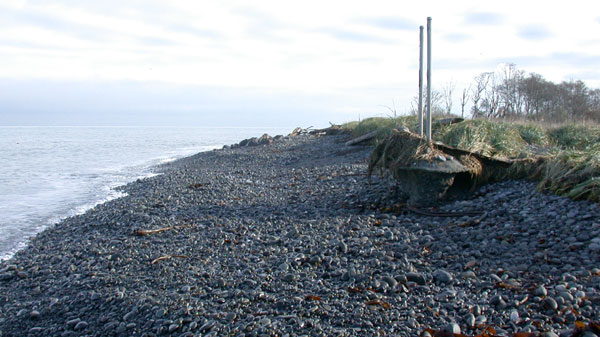 Elwha Beach sits where the Elwha River meets the Strait of Juan de Fuca in northern Washington on the Olympic Peninsula. The beach runs east to west and is primarily a cobble beach, as seen in photos A-C. The eroding Olympic Mountains serve as sediment for the beach and the sediment is carried to the ocean by the 45-mile long Elwha River. Two dams on the Elwha River built about 90 years ago trap sediment that would have reached the beach. Scientists estimate that 14 million cubic of yards of total sediment are being prevented from washing down stream. Six million cubic yards is thought to be sand.

Photo A shows the cobble beach looking west, but this beach has not always been primarily cobble. Prior to the construction of the dams, the sand and cobble formed the beach together, but deprived of much of the sediment, the beach has been steadily eroding.

Looking to the east, photo B shows the remains of a beach access walkway in the form of two concrete plugs that used to be buried on the beach. The erosion the east is more severe than that to the west because the littoral drift is to the east from the Pacific into the Strait of Juan do Fuca towards the Strait of Georgia.

Prior to 1911, the Elwha River (the mouth of which is shown in photo C) supported 10 stocks of salmon and steelhead. Elwha Dam was built on the Elwha River in 1911 and Glines Canyon Dam in 1925. Neither dam accommodated fish passage limiting anadromous fish to the lower 4.9 miles of the river and severely reducing or eliminating runs. The dams also caused the inundation of important riverine habitat and degraded water quality (increased temperatures and reduced nutrients). The ecosystem within Olympic National Park has been adversely affected by the lack of marine-derived nutrients. In 1992, Congress enacted PL 102-495 directing the Secretary of the Interior to “fully restore the Elwha River ecosystem and anadromous fisheries”. An extended period of examination of many alternatives determined that removal of the Elwha and Glines Canyon dams was the only way to fully restore the ecosystem and all fisheries. Today, the project is in full swing with the National Park Service (NPS) as the lead agency and the Bureau of Reclamation (USBR) providing technical support. The natural restoration of marine derived nutrients (via salmon carcasses) to an entire watershed from where they have been absent for almost 100 years will provide a unique test of the resiliency of upstream riverine and terrestrial ecosystems. The dam removal will restore the natural flow of sediment to the Strait of Juan de Fuca shoreline. Thus the dam removal adds an important element of coastal restoration unique to this project.