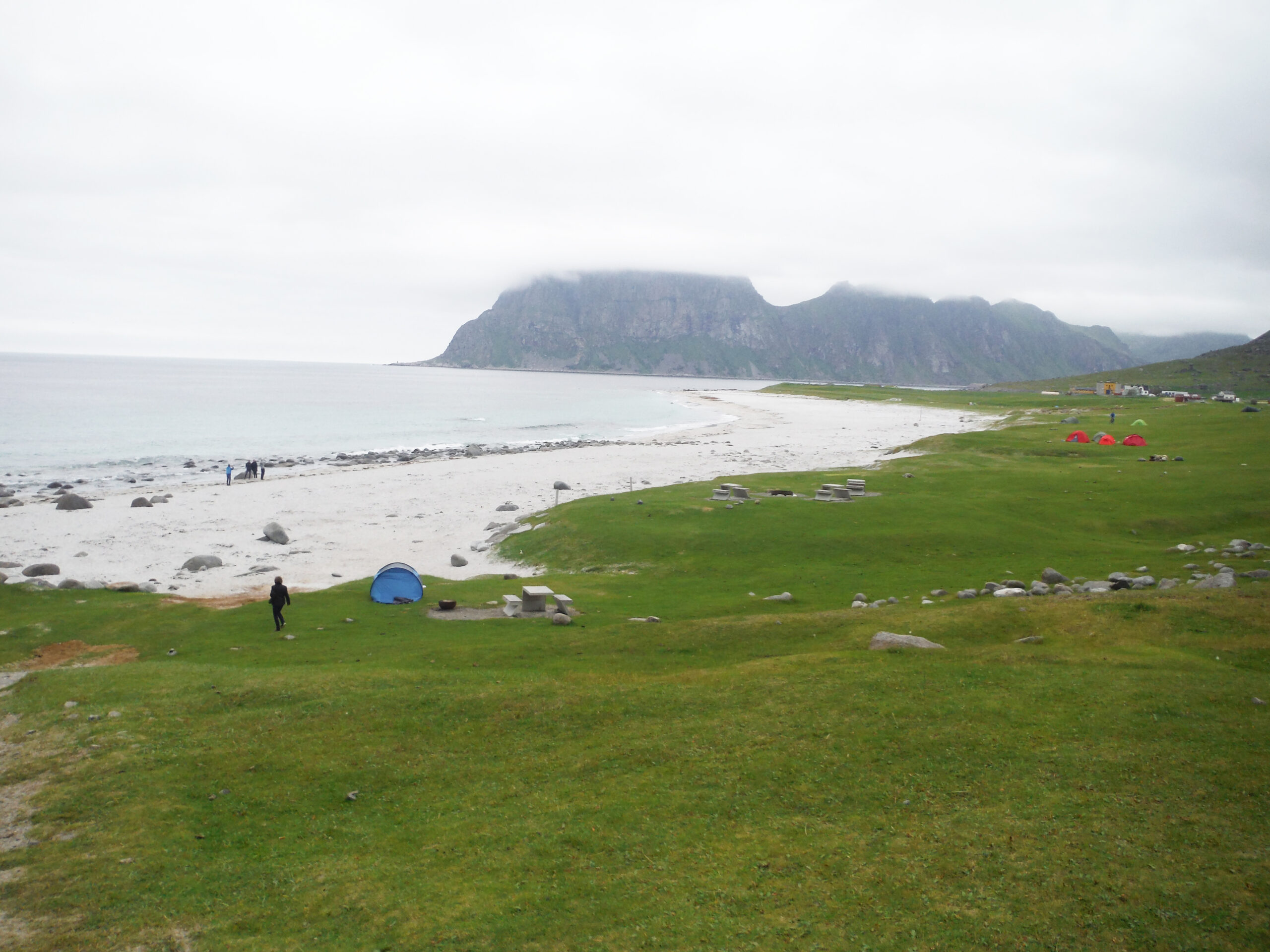 The Lofoten Islands make up an archipelago in the Norwegian Sea off the northwestern coast of Norway at a latitude of 68.1° N. Thanks to the temperate waters of the North Atlantic Current (the northeastward extension of the Gulf Stream), the Lofotens enjoy a milder climate than other parts of the world at the same latitude, such as Greenland and Alaska. The surrounding waters can be cold, but some people swim and surfing is a popular sport off some of the beaches. According to the Visit Norway website, the coastal climate in Lofoten makes the winters mild and the summers relatively cool. Here, the northern lights (aurora borealis) can be viewed from September to mid-April and the midnight sun is seen between late May and mid-July.

The two beaches we visited were on Vestvågøya Island in Nordland county: Haukland Beach, said to be the most beautiful beach in Norway, and Uttakleiv Beach, which is one of the most popular beaches, if not the most popular (Figure 1). Haukland Beach is a wide, flat strand, a good place to stroll, picnic, or play (Figures 2a-c); Uttakleiv is too, although a bit narrower. Both have grassy dunes behind (Figures 3, 4). These beaches consist of fine-grained gray-white sand for the most part (Figures 5, 6), but Uttakleiv has a large number of boulders and smaller rocks, typically Paleoproterozoic gneiss, on its western end (Figure 7). Uttakleiv Beach strand is famous, in particular, for a heart-shaped rock that stands on end on a boulder. How? (Figures 8a,b) On the grassy dunes is another heart, a pretty design shaped of various stones (Figure 9). The beach is informally known as the “heart beach” and labelled the most romantic beach in Norway. It faces north so is a good beach from which to view the northern lights. Haukland, on the other hand, faces westward and would be an ideal place for viewing a sunset—or the quick dip of the sun below the horizon, possibly.

Although about 100 miles above the Arctic Circle, beaches along the Lofoten islands are popular tourist attractions. These two are particularly popular among photography buffs, and a quick internet search will reveal many images of the northern lights. Tourists abound here, especially when the sun never sets or when the northern lights are present (Figure 10). Our visit didn’t include either event, as we were there during the middle of a summer day. Had we stayed until evening, we could have viewed the midnight sun.
You can walk from one beach to the other by going around Mannen Mountain on the coastal trail a few kilometers (Figure 11), or you can drive through a tunnel under the mountain to reach Uttakleiv from Haukland. We took the tunnel. Both beaches are definitely worth visiting. In addition to being ideal for photography, these beaches are popular places for camping, hiking in the surrounding area, and just daydreaming. At Uttakleiv, numerous tents dotted the landscape and a number of camper vans were parked up at both beaches (Figure 12).

These famous beaches are bordered by mountain peaks and face clear blue-green waters, creating beautiful views in both directions—inland or out to sea (Figures 13, 14). Across the road from Haukland Beach is a pleasant scene of farms reaching to the base of the mountains, and the road is lined with pretty white wildflowers (Figures 15, 16). Unfortunately, these plants are actually noxious weeds, with the interesting common name kjempebjørnekjeks (literally, giant bear biscuits), of the species Heracleum mantegazzianum (giant hogweed). They are an invasive species and an aggressive grower, with poisonous sap that causes skin blisters or rashes (CABI, 2019).
Changing sea levels have affected the area for millennia (Simpson, 2015). Even as the ice sheets melted, the islands rose up, leaving them high and dry—out of the rising seas. Having the grassy dunes behind both Haukland and Uttakleiv will be an advantage during the current sea level rise, as waves will gain access to these onshore sand supplies, lending life to the beaches that should continue to survive for some time (Cooper, et al., 2020). It will be interesting to see them later in the century, to see whether shoreline retreat, expected globally from rising seas, has affected these areas.
While the possibility of an increase in the frequency and magnitude of storms, including storm surges, is a concern along Norway’s coast where a number of little fishing villages at the edge of the water face flooding events, sea level rise is not considered a serious threat for Norway (ACIA, 2004; Centre for Climate Adaptation, 2020).

My thanks to Norway resident Katharine Dixon Wheeler, Nicholas School alumna, for comments on this article.