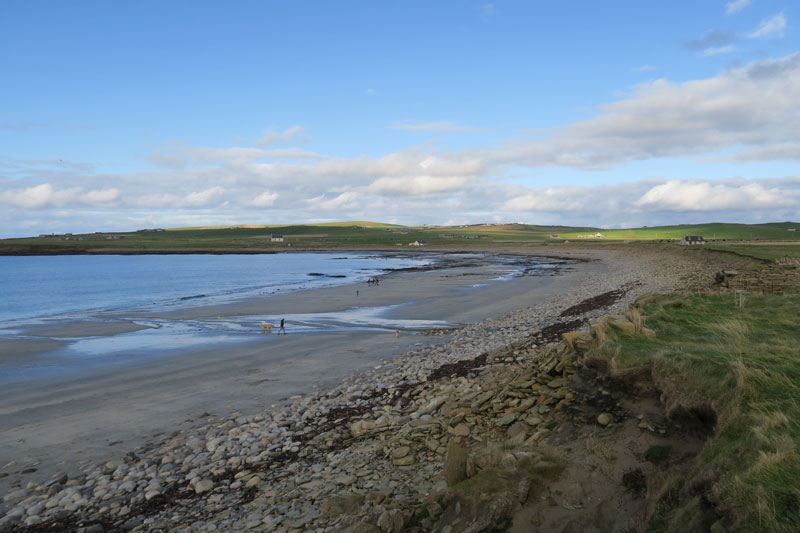 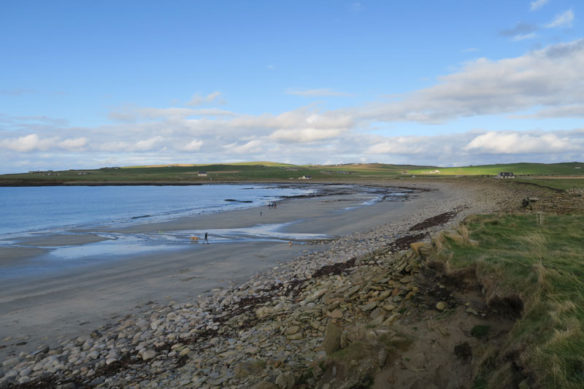 Perceptions based on the present – what we see, hear, feel at the moment – bias our perception of the past and future. A static view of our environment is misleading. The human association with water, particularly shorelines, is a case in point. We do not perceive the history of place, and globally we occupy sites as if they are unchanging, not realizing that in fact they are of high risk. The following are the author’s impressions and personal discoveries from a couple of hours’ visit to Skara Brae, Scotland, site of a Neolithic village with origins going back 5000 years. This UNESCO World Heritage Site abounds in mystery, secrets yet to be discovered, and lessons to be derived. The poet, George Mackay Brown’s words, that the “sea gives and takes” reflects the history of Skara Brae’s discovery, partial loss, and is visionary in that the latter continues. Skara Brae, along with several other important archaeological sites in the Orkney Islands, are now in the “sea takes” category. Skara Brae is now on the shore of Skaill Bay, Mainland, Orkney Islands, just off the northern coast of Scotland (Figure 1). The crescent-shaped beach at the head of the bay is subject to a high tidal range, and during Atlantic storms the shore is battered by very high wave energy (Figure 2). At spring low-tide there is a wide beach, but during the high tides the beach can be completely inundated. In 1850 a storm erosion at the back of the beach exposed some of the houses of the old Neolithic village, roofless but otherwise intact (Figures 3 and 4). The land owner initiated an excavation that continued until 1868, after which the site remained undisturbed, except for being raided for artifacts in 1913. The sea again took a bite out of the site during a 1924 or 1925 storm that destroyed one of the houses. The first-generation protective seawall was then built in the late 1920s, and has since been reinforced several times (Figure 5).

“The environmental setting of the village when first constructed has been determined to be well away from the ocean shore, behind protective dunes… ” — William J. Neal

In viewing the village, one’s first impression is “why would they build their houses in such a hazardous place?” (Figures 4 and 5). But we must flash back from 5000 years ago to present in order to understand how the site came to be at the mercy of the waves. The environmental setting of the village when first constructed has been determined to be well away from the ocean shore, behind protective dunes, and near a freshwater lake. By that time, the rapid post-ice-age sea-level rise had slowed, but sea level was still rising. And the climate was changing. Very likely, the ocean shoreline was moving up the valley that is now the bay, and some archaeologists suggest that over time, the village was abandoned, perhaps because of storms moving sand dunes over the structures, as well as changes in the culture. In the sense of “the sea gives,” the dune burial preserved the village. Some millennia later, as the bay extended landward, the sea gave again when the 1850 storm revealed some of the village, before beginning the processes of “taking” by eroding the site. Visiting the site during a low-spring tide reveals a beautiful beach; one in which the sediment distribution reflects the energy gradient of storm waves (Figure 6 and 7). The steep slope of the beach is apparent from atop the bluff, with cobble to boulder sized, flat flagstones at the uppermost back beach, a zone of more rounded cobbles to boulders at the base of the back beach, and the wide sandy inter-tidal beach on which ridges and runnels have developed (Figures 7 and 8). The flat flagstones are derived in part from the bedded sandstone outcrops that cross the beach (Figures 9 and 10). This island’s west coast is made up primarily of Devonian age sedimentary rocks, the “Old Red Sandstone”, which consists of these bedded sandstones and siltstones that have been referred to as ‘flagstones’ since the early days of quarrying, and are still used in construction. The flat stones in the walls of the Skara Brae houses were of the same origin, 5000 years ago. The low-tide beach is a wonderful canvas on which a variety of bed forms have developed from waves and currents. Ripple marks can be seen in the runnels (troughs) as they drain, and the water-saturated sand from high tide drains during low tide, giving the beach mirror-like watery patches (Figure 8), and forming tiny rill marks from seeps (Figure 11). In places, one can see stripes of light and dark on the beach from truncated antidunes that formed during the falling tide (Figure 12), and beach cusps on a grander scale. The beach sand is generally fine to very fine, and poorly sorted with very small pebbles of dark gray siltstone. The light gray color of the beach reflects the varied sand composition (Figures 13 and 14), which includes a surprising amount of calcareous material from microscopic shells and skeletal fragments (e.g., clams, snails, forams, echinoid spines, and a lot of unidentifiable material). The darker shade is derived from black sand-sized rock fragments and mineral grains including biotite mica. Quartz grains are also common. Not far from Skara Brae are other ancient sites (e.g., Maeshowe, Stones of Stenness, the Ring of Brodgar), but for this geologist the nearby Yesnaby coast was the highlighted contrast to Skara Brae beach. Yesnaby is a sheer rock coast – beachless with sea cliffs, stacks and arches. All cut in the “Old Red Sandstone” sequence including the Stromness Flagstones (Figure 15) in which one can find ancient ripple marks (Figure 16) and mudcracks on the bedding planes of these ancient lake deposits. And local beds contain fish fossils of the kind first described by Hugh Miller and his contemporaries in the 19th Century, in the days of the development of the science of geology in the British Isles. For this author, Skara Brae was a place of discovery, that former civilizations did retreat in the face of climate change and associated hazards, that a poet understood better than most that the “sea gives and takes”, that there are a few places like Skara Brae where a seawall is justified (even there the wall contributes to nearby erosion), and, along with its Orkney sister sites, this Neolithic village is an example that a shoreline can be a reservoir to be ‘mined’ for knowledge rather than sand.