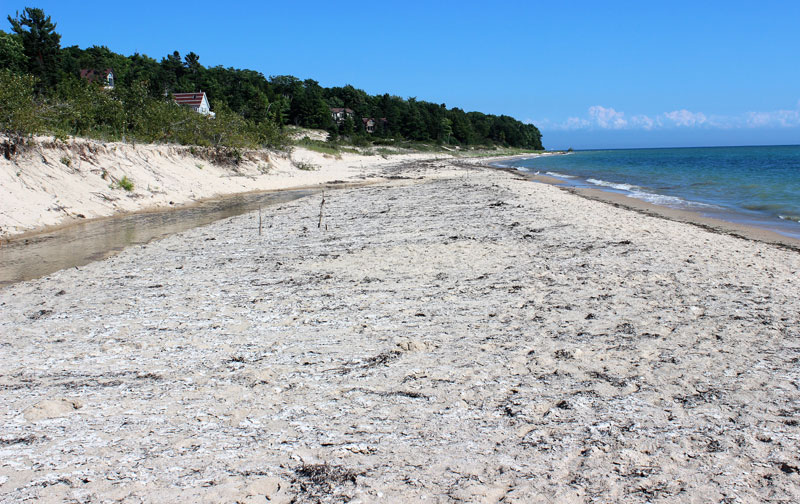 This narrative might be titled ‘What I’ve learned on my Summer Vacations.” From 2016 through 2020 our extended family has spent a week each summer on Beaver Island, the largest island in Lake Michigan. Most readers probably have heard of Mackinac Island, either for its strategic place in early American history, or as today’s high-end resort. In contrast, lesser known Beaver Island has a more colorful history, is more laid-back in terms of tourism, and for the most part is very eco-friendly (wildlife, birding, hiking trails, a kayaking water trail, inland-lake fishing, dark sky gazing), and natural beaches – that is beaches in their natural state (unraked, litter free, unfettered by coastal engineering). The nickname ‘America’s Emerald Isle’ is appropriate. The island remains accessible only by boat, including a car ferry, or by plane, which explains in part why development has remained light. Sparse evidence shows that indigenous people visited the island in ancient times, perhaps as early as 3000 to 1000 B.C.. By the 17th Century, in the heyday of the fur trade, the Odawa culture occupied the island seasonally in support of hunting and fishing, with minor land clearance. Small Indian villages on Beaver, and associated islands, persisted into the 20th Century. But after the tribes ceded this part of Michigan in 1836, a gradual influx of white settlers began with traders, woodcutters, and mainly fishermen, including men from Ireland. In the 1840s a new group of migrants brought about a major change in the island’s ecosystem. An offshoot group of Mormons moved onto the island, first as neighbors, but in 1850 – 1852 displacing the earlier Irish fishermen. The group’s leader, James Strang, proclaimed himself ‘king’ of the island, and their settlements included not just the St. James port/fishery, but outlying farm settlements with roadways cleared through the forest. As farmers they cleared the land, planted crops and apple orchards. These farmsteads remain as the open areas today, some still farmed, others abandoned but evolving into prairie-like areas. Strang pushed his followers too far, and in 1856 two of the brethren assassinated Strang. The Mormon colony broke up and moved, and the Irish came back strong. Fishing remained a mainstay in the economy, but wood cutting was important. Even after the advent of coal-fired steamships, logging was an economic driver (cord wood, RR ties, construction lumber, even tamarack bark). Temporary rail lines were laid on the island in support of the timbering. In some cases, the beds of some of these lines were on ancient gravel beach deposits at the base of the old sea cliffs (e.g., West Side Road south of Fox Lake Road junction), and some of today’s roads were originally constructed on these abandoned rail grades (sequential land use). The island remains heavily forested, but there is little old-growth forest to be found. One has to wonder if, during these times of extensive clearance of the forest, the runoff from the land increased? Were fossil dunes, stabilized by forest cover, reactivated, freeing sand supply? And if so, was more sandy sediment carried to the beach?

The Index Map (Figure 1) provides general locations of accessible beaches, and some related headlands (see Beaver Island Chamber of Commerce for more specific maps including trails for birders, hikers, kayakers, etc.). A brief description of each locale is provided for reference in the discussion of beach perspectives that follow.

What can we learn from Beaver Island’s shores, whether they be sandy beaches, gravel beaches, wave-cut platforms, bluffs or cliffs? Our perspectives will depend on the scale of our view (from satellite/map views to landforms to bedforms to sand grains), to the time frames involved (millennia to centuries to days/hours/seconds), as well as the varied processes that have shaped the shores. Five summers for a geologist yield the following:

The Point of These Perspectives

The sea-level rise gets the media attention, but outside of the Great Lakes region there is very little news of buildings falling into the lakes, roads being flooded, port facilities being compromised, or the political pressure being generated to do something to save buildings. A 7-foot rise in 7 years for Lake Michigan ought to grab a whole lot of people’s and politicians’ attention because it’s the perfect analogy for what ocean nations are looking at in terms of the coming losses from the sea-level rise. Ironically, this is not new for the Great Lakes. Similar highs occurred in the 1950s, 1970s and 1980s, and to a lessor extent in the 1990s. All with property losses, extensive efforts by individuals as well as communities to combat property losses by building shore-hardening structures (seawalls, groins, bulkheads), most of which failed, and lots of pressure on officials to take some action (even FEMA’S NFIP was modified); each time at a very high economic cost. And Beaver Island is no exception. Houses built too close to the shore (either didn’t check past history or local evidence of previous high water), and now the same old shore-hardening ‘protective solutions’ are being adopted, when they’re known to have failed in the past. In 2020, locals told of rip-rap boulders being barged to the island for placement in front of property, only to sink as sand was washed out from around them, or their rearrangement by storms. And where property is successfully protected, it’s at the ultimate expense of loss of beaches and coastal aesthetics. Lots remain for sale where the water table is now near the surface, not places suitable for in-ground septic systems. Change has been the rule for Beaver Island, and history shows that such change isn’t always for the best. Displacement resulted for many. Recent experience was the Chance to learn in regard to shoreline conservation. What’s next?