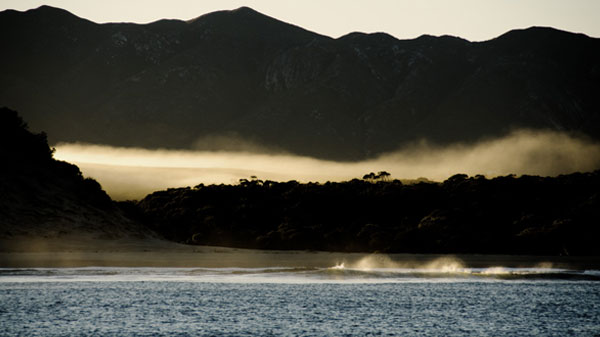 Have you ever dreamed of a place as a child that you always wanted visit?

I was lucky enough to visit South West National Park in Tasmania, chartering the South and West coast by boat for the annual South West Marine Debris Cleanup. Growing up in Tasmania from the age of 4 to 15, this is that place of wonder for me. A childhood dream realised.

Sipping on a warm cup of coffee in my comfortable abode in Byron Bay, I got the last moment call up from Patagonia to have a slot on the trip. I couldn’t believe it. Suddenly I was touching down in Hobart to familiar sights and surrounds, that only a childhood could breed.

The initiative has been running for over a decade, facilitated by Environmental Scientist Matt Dell from Hobart. The cleanup aligns itself with Patagonia‘s ethos of giving back to our planet, donating 1% of profits (grossing $40 million to date) to grassroots initiatives such as the South West Marine Debris Cleanup. Through Dell’s passion for the Tasmanian natural environment, a love for the South West (a World Heritage area), and with the support of companies like Patagonia, the trip is a very important endeavour in highlighting the facts, that even in the most remote and isolated areas of the planet, our influence is felt.

A group of 23 volunteers was orchestrated this year to aid Dell in the week-long cleanup (the biggest contingent in the cleanups history). Thousands of pieces of rubbish (some bigger than others) wash up onto these isolated shores with no access to the public. Chartering a group of fishing vessels, we were able to enter these wanderlust areas, doing our bit by collecting the debris, hauling them onto our boats, sorting the rubbish by night into categories, and getting to breath and taste the remote wonder of Tasmania’s main jewel in it’s crown.

As an added bonus, we also got the chance to surf!

The might of the Roaring Forties is a constant influence on Tasmania, a world owned by Mother Nature. Radio is the only means of communication with daily forecasts of 3-4 metre seas bombarding portions of our trip, with fluctuating weather and wind, and the adjusting sea-legs for those in new territory. The empty white sand beaches and new footprints governed, we were explorers to a foreign shore. The serenity was shadowed by jagged ranges of mountainous teeth in our peripherals. The ying/yang beauty was unfortunately desaturated by all the colours of the rainbow in plastic, bottles, rope, bait straps, fishing nets, beer cans and so much more.

Over the days, which turned into a week, the grand total of rubbish collected off six beaches was 18357 items, totalling around 3.5 tonnes. This is the biggest recorded haul in the Cleanup’s history. In material terms 93% of the rubbish was plastic comprised mainly of rope, bottles and miscellaneous plastic pieces, and 4.5% was metal mainly as aluminium cans. Small pieces of plastic, caps and lids continue to be found in increased numbers, and these along with small pieces of rope and bait box straps accounted for over 70% of the rubbish items collected.

The lesson…To respect what we have, to find ways to sustain, and let places like this flourish and be wild, unmarked by mans lack of accountability.
— Johnny

This humbling figure came down to the team recovering 11,317 items in just five hours off a 1.5 kilometre length of coastline. A series of rocky coves were home to kelp riddled foreshores of cross thatched nature and garbage. An eyesore as far as the eye could see. The prognosis was no better in the opposite direction, where sharp rocks and cobblestones where home to an ambush of florescent, we had found Tasmania’s ‘Garbage Patch’. There is still more to obtain next year.

This year the team finally recovered ‘temples de rope’ – three huge rope balls weighing between 200-400 kg each that Dell had observed over the last few years. There awe and size took at times 10-12 people to move the monsters, and hours of deliberation and digging. The rope was finally hauled aboard by a Hiab, lifting them from the water, and leaving the beaches beautiful.

The more unusual items found on the shore this year included a fridge, a bodyboard, a cold full can of beer and an assortment of toys including a still inflated party balloon. Once again there was rubbish from all corners of the globe including numerous Japanese, Chinese and Korean oil and food containers, fishing buoys and trawl nets.

A selection of the rubbish was displayed at Salamanca Market on the 7th of May 2011.

The trip was a dream come true for me. The South West National Park is like stepping into another world. A place where you can breath the freshest air, marvel at the wild country, and know that you as a human being are a part of Mother Nature.

This is the lesson. To respect what we have, to find ways to sustain, and let places like this flourish and be wild, unmarked by mans lack of accountability.

Filmed and Edited by Johnny Abegg
Music by Any Noise

The South West Marine Debris Cleanup is an annual trip orchestrated by Environmental Scientist Matt Dell to the remote wilderness of Tasmania, where tonnes of rubbish can be found on the beaches of this pristine and isolated environment.

This is his story.

Thanks to Patagonia for their ongoing support of environmental issues.

For more about the cleanup, or to make a donation visit: marinedebris.blogspot

Beach of the MonthPlastic Pollution