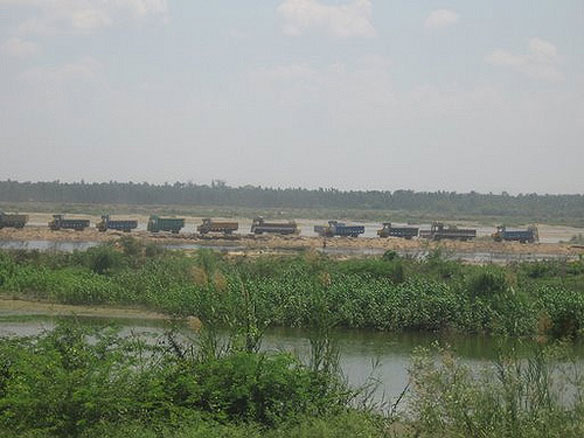 Sand mining activities, Tamil Nadu. Tamil Nadu lies in the southernmost part of the Indian Peninsula. Photo source: ©© Tamilbuddy
“Sand is the second most consumed natural resource, after water. The construction-building industry is by far the largest consumer of this finite resource. The traditional building of one average-sized house requires 200 tons of sand; a hospital requires 3,000 tons of sand; each kilometer of highway built requires 30,000 tons of sand… A nuclear plant, a staggering 12 million tons of sand…” Captions from “Sand Wars” Award-Winning Filmmaker: © Denis Delestrac (2013).

Life is Not a Beach; Frontline (07-12-2015)
Mining for beach sand minerals poses a threat to the economic and social fabric of fishing villages along Tamil Nadu’s coast…

Disappearing Beaches of India, The Hindu (06-06-2015)
Beaches and coasts are amazing wonders of nature. India’s coastline stretches for around 7,500 kilometers. Yet, as much as 40% of India’s coastline is eroding at an alarming level, not only in Tamil Nadu and Puducherry, but also in many other beaches…