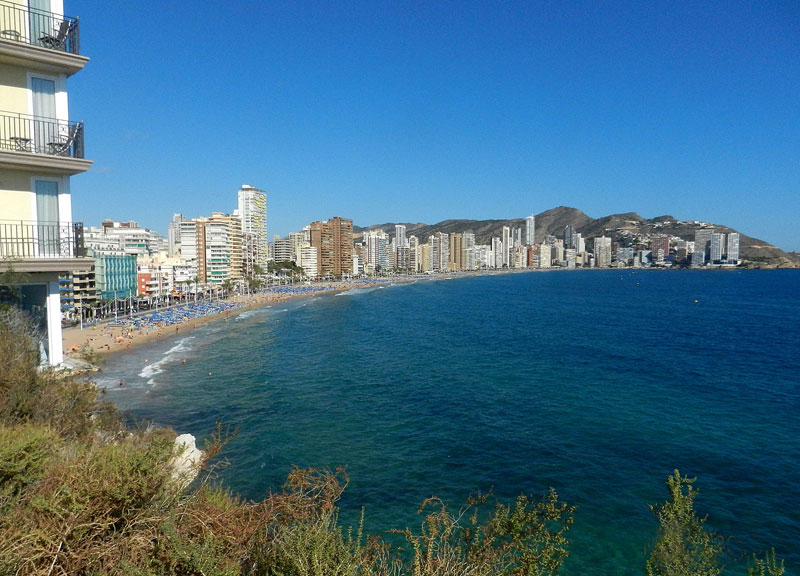 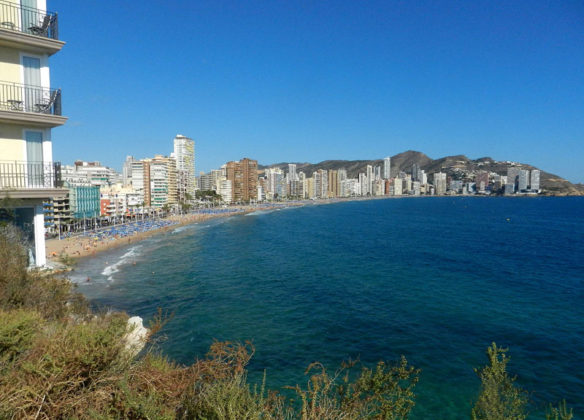 Torrevieja, a former fishing village on the southeast coast of Spain (Costa Blanca) in Alicante province, is now a thriving tourist city with a 2016 population of around 85,000, down from a high of over 105,000 in 2013. The projected population for 2017 is 92,752, a number that likely expands to about half a million in high season (1). With an advertised 320 days of sunshine a year,(2) the entire 200 km coastline of the Costa Blanca region along the Mediterranean has a busy tourist industry. Temperatures are normally mild for most of the year, with warm winters, but on January 18, 2017, Torrevieja had its first snow in over a century (3). Winter storms over the last three years have brought high winds and waves up to 6 meters, eroding beach sands and damaging homes. An Alicantetoday.com news article mentions that the national government spent almost 4.7 million euros to repair last winter’s storm damage on the beaches of this province. The northernmost beach of the city of Torrevieja, Playa de la Mata, had a 260-meter-long wooden seafront promenade. In an attempt to prevent further beach erosion, the decision was made to remove the promenade and replace it with a concrete retaining wall that was completed by June 22, 2017, at a cost of €650,000. According to the news article, the beach has effectively been made 4 meters wider, with 1,000m2 of “extra” beach as a side effect of the seawall (4). However, seawalls are not normally considered to be beneficial for a beach, as they are built to protect buildings or property, not beaches. The detrimental effects of seawalls have been known for decades and seen on other beaches worldwide. Scientists Pilkey and Wright (1988) noted that seawalls effectively destroy beaches along eroding shorelines (5).

Torrevieja has a series of golden, fine-to-medium-grained sand beaches (five of which are Blue Flag rated, i.e., good water quality, clean, accessible, etc.), along with some rocky stretches made up of carbonate beach rock associated with former coastlines (6,7). Most of Torrevieja’s beaches have lifeguard and first aid stations and some also have space for volleyball courts and children’s play areas. This Mediterranean locale is ideal for sunbathing and swimming, and in some places along the Torrevieja shore, buoys demarcate the safer swimming areas. While the largest known tidal range here is 0.17 meter (8), one area alongside the Paseo Juan Aparicio has man-made containment areas for sand and safe swimming pools that are connected to the sea. Breakwaters and jetties surrounding these areas protect against large waves and are used by both fishermen and sunbathers. Rock pools entertain children who enjoy exploring them for marine life.

“With an advertised 320 days of sunshine a year, the entire 200 km coastline of the Costa Blanca region along the Mediterranean has a busy tourist industry… ”
—Norma J. Longo

The individual beaches of Torrevieja are separated by a harbor, rock jetties, coves, and creeks. From SW to NE are Playa de los Naufragos and Playa del Acequion, sandy beaches that lie on either side of the salt conveyor belt described below; the rocky Paseo Maritimo Juan Aparicio with its protected swimming areas and decking over some of the rocks; Playa del Cura, a busy, central, urban beach that is bounded on the north by a rock jetty; Cala del Palangre, a small cove beach, one of many coves along the coast; Playa de los Locos, a long sandy beach that also has some exposed rocky areas; Calas de Torrevieja, a long stretch of coves in the beachrock coast; and finally, Playa de la Mata. A rocky point, Cabo Cervera, lies south of Playa de la Mata.

Playa de la Mata is the biggest, over 2 km long and 40 meters wide, although of variable width, with considerable beachfront development such as restaurants, homes, and shops. La Mata ends on the north at the Canal de las Salinas that divides it from the beaches of the next northerly town, Guardamar del Segura. Guardamar’s beaches were also damaged in the 2017 winter storms, leaving some beachfront properties in need of repair (9). In mid-town Torrevieja, Playa del Cura is a popular 325-meter-long crescent-shaped beach. The promenade has wooden benches where you can sit and listen to the sounds of the sea. Playa de los Locos (named after a former psychiatric hospital nearby) is 760 meters long and 25 meters wide (10). This beach lies just north of a rock jetty and is bordered to the north by a rocky point with buildings, including an apartment complex.

Large amounts of seaweed are common in several areas, but the sandy beaches are cleaned daily by machines, which makes for neatly groomed beach sands but which has been shown by scientists to harm the beach fauna. Torrevieja’s beaches are not dog-friendly, but in 2016, the city of Santa Pola farther north along the coast opened a dog beach, La Caleta dels Gossets, at a protected cove. Since beach sands can sometimes be polluted by human or animal waste, the city has strict rules in place to keep this special beach clean (11). In the short time since its designation as a dog beach, it has become a popular destination, with no seawalls in sight.

Much of the Torrevieja shoreline is protected by seawalls, with some local businesses (such as restaurants) jutting out onto the beaches in places. Several buildings along the Acequion beach north of the port of Torrevieja are on the sand and very close to the water line. Seawalls along most of the beaches are backed with a palm-tree-lined promenade that stays busy—people strolling, sitting on benches, eating and drinking at the many restaurants, kiosks, and shops, and enjoying the breeze, although it can be choked with cigarette smoke. As of May 2017, the city council, after receiving numerous complaints of there being too many cigarette butts in the beach sands, opted to distribute portable ashtrays for smokers to use and dispose of in available wastebaskets (12). Beyond the seawalls, concrete benches are scattered around on top of the rocky lengths of beach, and a few ladders lead down into the sea. One of the benches “hosts” La Bella Lola, a lady in bronze who gazes out toward the horizon, awaiting the return of her husband who was lost at sea. She is said to symbolize all of the women who have watched their men sail away never to return again (13).

Torrevieja is situated in a region that is associated with several fault lines. The NW-SE dextral Torrevieja Fault, part of the Bajo Segura fault zone, is known to be active, and the entire coast is earthquake prone. The convergence of the African and Eurasian tectonic plates, currently at about 4 to 5 mm/year, creates seismic activity that consists mostly of low-magnitude quakes or tremors which are often ignored by people (14). However, one quake in the past was devastating. The March 21, 1829 earthquake that registered 6.6 on the Richter scale killed 389 people in and around Torrevieja and leveled the entire village, plus it caused widespread property damage up and down the coast (15). A 3.6 magnitude quake struck in March 2008, a number of others occurred between 2011 and 2015, and on March 9, 2017, parts of the city of Torrevieja were shaken, although without injuries or destruction (16). Since underwater earthquakes can potentially trigger tsunamis, this area will be vulnerable to inundation.

Despite the seismic activity, this part of Spain is known for attracting tourists and expats. Torrevieja is a large, sprawling city dominated by foreigners, although a number of Spanish tourists and residents also visit or reside here. Many British, German, and Scandinavian expats own second homes or apartments in the city or in other towns around Alicante. Along the coast to the northeast is Benidorm, another former fishing village that is now filled predominantly with high-rises, built in a relatively confined space due to the large cliffs that border on the city. Benidorm, like Torrevieja, is popular with tourists and also is populated with expats from several countries. The beaches of Benidorm are beautiful and usually crowded, as are those of Guardamar del Segura and Santa Pola. Away to the south lies La Manga, a sandy barrier that separates the Mediterranean from Mar Menor, the largest lagoon on Spain’s Mediterranean coast. The barrier is about 20 km long and ranges from 30 to 500 meters in width but is less than 3 meters above sea level (17). Extreme storm events in the western Mediterranean may be rare, but this coast is vulnerable to flooding from storms and sea level rise. The barrier is densely developed and has numerous tall buildings, which will be difficult to eventually move back from the rising seas, as is the case in Benidorm.

“The huge tourist industry is due to the climate and the beaches, but the beaches are likely to be lost someday to the rising seas… ”
—Norma J. Longo

The 20-km coast of Torrevieja itself is not littered with high-rises, although it does have several. Many buildings here could be classed as low-rises, as they’re only about 6 to 8 floors high. The fishing industry is still thriving, and you’ll see a variety of fishing vessels and pleasure craft in the marinas. Torrevieja also has its famous salt lakes or lagoons which are below sea level and from which mountains of salt are shipped around the world. Connected to the sea by an artificial channel, the sea water infusion flows into the Lagoon de la Mata and is piped to Torrevieja lagoon where the salt is crystallized. Salt production has been increased by the use of salt from a diapir in the Cabezo de la Sal, Pinoso, where solution mining of halite via deep boreholes has taken place for many years. The brine from the boreholes is piped more than 60 km to the Torrevieja saltworks where the water is evaporated to yield the salt for distribution (18). A conveyor belt carries the salt to ships in the harbor.

Because of extraordinary amounts of rain during the winter of 2016 – 2017, the town had to import salt from Italy in May 2017 to meet the demands, as the lakes had become too diluted to efficiently yield enough of the commodity (19). Las Salinas de Torrevieja y La Mata are surrounded by a nature preserve that lends itself to a variety of unique flora and fauna, as well as recreational uses. The park is classified as a Zone of Special Protection for Birds (ZEPA zone) by the EU, is considered a Place of Community Interest (LIC), and is number 456 in the list of Ramsar Wetlands of International Importance (20,21). There is even a Sea and Salt Museum in Torrevieja (Museo del Mar y de Sal) that explains the history of the important salt industry in the area.

The huge tourist industry is due to the climate and the beaches, but the beaches are likely to be lost someday to the rising seas. Torrevieja and the other beach towns of Spain’s Costa Blanca will long remain magnets for sun seekers, earthquakes notwithstanding—and sea level rise may seem very distant or non-existent to them until their seawalls or rocky coastline no longer protect the buildings.