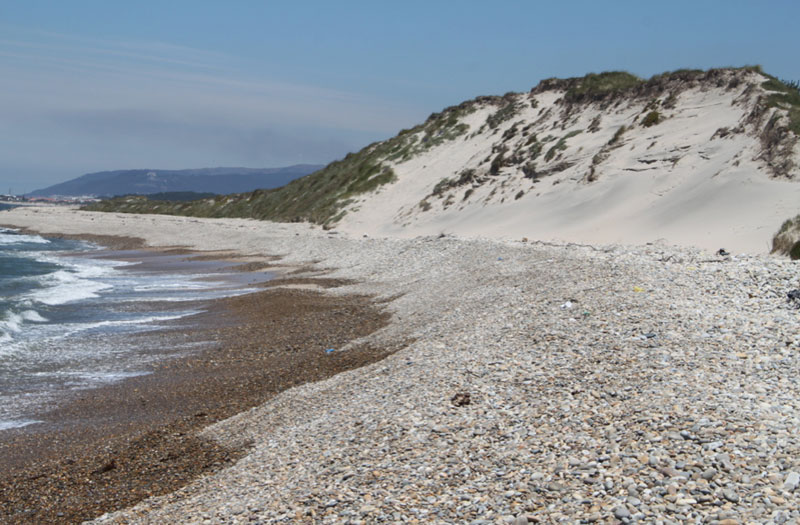 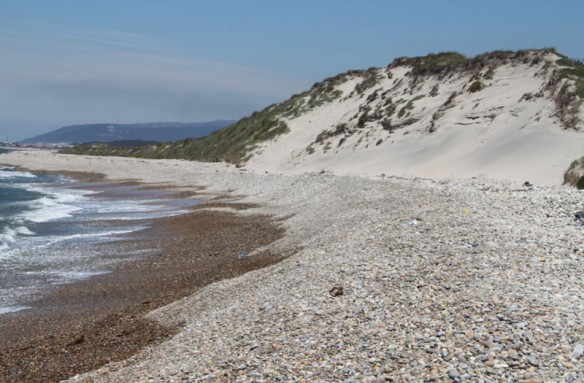 Portugal, located in the most western part of Europe, is a country with more than 900km of Atlantic coast. The coast is very diverse in terms of landforms and sediment types. Coastal zone topography ranges from high, shear rock cliffs (e.g., Sagres and Peniche areas) that are sometimes beachless, to low coastal plains that have long beaches as in the barrier Islands of the Algarve, and the long reaches along the N-S trending Atlantic coast. Small pocket beaches are typical of the rocky, highland shores. Beaches are backed by cliffs, bluffs, or sand dunes, and beach sediment ranges from sand size to gravels, pebbles, cobbles and boulders. Belinho Beach is part of a long beach stretch in NW Portugal that has transformed from sands to coarse gravels in just two to three decades.

“Besides exhibiting an erosion trend for decades, the NW coastal zone of Portugal was also the stage of a new phenomenon, since the end of 20th century.”
— H. Granja & J.L.S. Pinho

The NW coastal zone of Portugal (Fig. 1) is narrow, extending from the sea inland to an ancient sea cliff from a higher stand of past sea level. The coastal profile is composed of two main rocky platforms. The lower one extends offshore and under the lower beach. Until recently this seaward beachface was covered with sediment, but erosion has exposed the bedrock surface in recent time (Fig. 2) with resulting sand loss. The landward cliff and the associated higher platform are carved into faulted granites, while the lower platform, part of a NW-SE oriented complex syncline, is metamorphic Palaeozoic rocks. The surface of the lower platform is slightly irregular, with fault controlled low areas, overlain by a thin cover of Holocene sediments.

The hydrological climate of this coast is one of mixed energy, being both wave and tide-dominated.Tides are mesotidal (2 to 4m), semi-diurnal, with neap average tidal range of about 1m, and spring average tidal range of 2.8m. Maximum amplitude of tidal range can reach 3.9m. The wave climate is characterized by mean wave height of 2m, an average wave period of 9sec., and the main direction is from NW (79% of the time). The net sedimentary drift is from North to South, though at some points this is inverted due to the presence of outcrops, harbour jetties, or shoaling bars (as around the ebb tidal delta of the Cávado River mouth) that diffract the dominant NW incoming waves. The presence of some engineering structures (groins and revetments) also contributes to interference patterns in the general circulation and so on the morphology.

During the second half of the 20th century, coastal erosion in Portugal became a dominant process, as has happened in other coasts worldwide.

Besides exhibiting an erosion trend for decades, the NW coastal zone of Portugal was also the stage of a new phenomenon, since the end of 20th century. The usual impacts from erosion, with beach narrowing and thinning, cliff/bluff retreat and landward beach migration have been observed, but another striking change has occurred over a long stretch of beach. Between the Lima and Cávado Rivers (Fig. 1), previously dissipative, sandy beaches (Fig. 3) changed to mixed sand-gravel beaches with gravelly beach cusps by the end of the 1980’s (Fig. 4) and then progressively converted into entirely reflective gravel beaches after 2000, although maintaining the inherited dune systems in their backshores (Fig. 5). This change in both shape and the dominant sediment type of the beach developed from North to South, and has taken place very suddenly in terms of shoreline evolution. The new coastal landscape presents the exposed rocky abrasion platform, steep gravel beaches (with boulders, cobbles and pebbles, and, sometimes, small fine sand aprons), and dunes (composed of fine sand), inherited from the previous sandy-beach morphology (Fig. 5, see also Google Earth, Praia do Belinho).

The waves breaking at the base of the beach face expend all their remaining energy in the swash zone, favoring the development of a steep beachface aided by coarser sediments.

Is this change a recurrent event?

The present configuration and reflective state of Belinho Beach is thought to be analogous to another local feature that formed prior to the Little Ice Age (LIA). Gravel deposits (fossil beach ridges) now found beneath LIA dunes probably formed under the same conditions as the present gravel beach ridges (Fig. 6).

The abrupt switch of beach shape/sediment dynamics must be related to strong changes in sediment supply and/or wave energy. High energetic conditions can deplete sand sources, favoring the concentration of coarser sediments available from the inner shelf. This would be the case for the present as well as the pre-LIA beach. In contrast, the LIA beach would have been dominated by sand, the source for which was available during this period according to historical texts.

When sand starvation occurs, the beachface adjusts and switches to a state of inner-beach reflectivity and correspondent gravel ridge development at the high-water position. After a new influx of fine-grained sediment like sand, the dissipative conditions will be reestablished, but the gravel ridges will be buried and preserved under the new beach (Fig. 6).

At Belinho Beach, one of the gravel sources is the beach ridges under the LIA dunes, but another source is certainly the inner shelf itself (Fig. 7), which is being reworked under the present sea climate.

The present and future trend

Belinho Beach and its N-S continuation is a good example of a beach segment with a fast and extreme evolutionary trend. The change from a sandy state to a gravel state was reached in just a few years. And this change is not the temporary situation of sand stripping during winter storms and the exposure of an underlying cobble/boulder lag deposit; temporary seasonal changes of sediment size and beach type as documented elsewhere in the world, and sometimes referred to as summer and winter beaches. The present Belinho gravel beach is in a metastable state that is potentially likely to continue to change.

The presence of outcrops in the lower foreshore contributes to sediment accretion on the beach, making the seaward cross-shore sediment transport more difficult, which leads to an increase of the berm height and steepness of the beachface slope. The ridge (Fig. 5) defends the bluffs against a direct wave attack, and also allows greater infiltration of water from the swash, decreasing the backwash energy over the beach face. This contributes to a strong reduction of sediment movement offshore at the same time gravel ridges defend dunes.

“Belinho beach is an excellent example for coastal managers and decision makers to take the option of doing nothing (natural protection status) and to let nature take its course.”
— H. Granja & J.L.S. Pinho

During storms, the beach profile is smoothed with the destruction of the cusp morphology and pebble imbrication, while the build-up of the berm crest turns the profile steeper (Fig. 8).

Since the beach became fully reflective, volumetric changes are small. Erosive processes affect the beach only during storms, when partial foredune overwashing occurs.

The small difference between the maximal and minimal sediment volumes in this sector indicates that the beach keeps some stability in its profile and sediment size, i.e. the beach is metastable. Consequently, the beach presents a robust behaviour, being less vulnerable to storm surge flooding and other coastal hazards; at least temporarily.

This coastal segment is undeveloped (just agricultural fields behind the dunes) and has large rock outcrop areas in the intertidal and subtidal zones, a steep beachface, a robust gravel ridge parallel to the foredune, and a well-developed dune system. And because of its short-term history of rapid change and metastable state, Belinho beach is an excellent example for coastal managers and decision makers to take the option of doing nothing (natural protection status) and to let nature take its course.