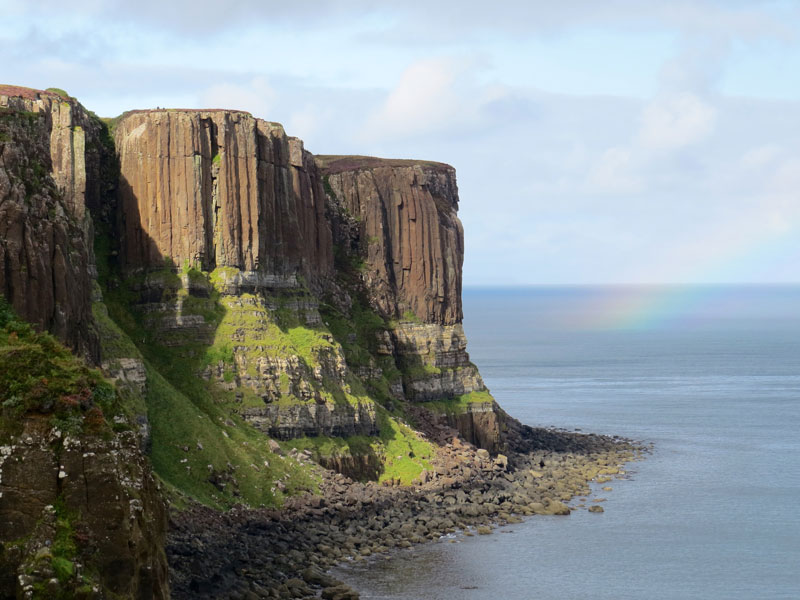 While on a circumambulation of the coast of Scotland in September, we noticed a description of a must see place, Coral Beach on the Isle of Skye. We were spending four days on Skye so decided to find this somewhat strange sounding beach. This name came as a surprise, mainly because Skye is situated at a latitude of 57.3 degrees north, nearly the same as Juneau, Alaska, and a coral beach seemed extremely unlikely.

The Isle of Skye is the second largest island in Scotland, and one of the Inner Hebrides along the nation’s west coast. It consists essentially of a number of peninsulas separated by bays that radiate outward from a mountainous central region, the Cuillin hills. Some of the oldest rocks on Earth are found on Skye, metamorphic gneisses that were formed about 2.8 billion years ago. There are also much younger volcanic and sedimentary rocks, including some spectacular columnar jointed basalts, which are exposed in the 300-foot high seacliffs at Kilt Rock along the eastern coast.

While situated almost as far north as Juneau, the offshore Gulf Stream helps to create a somewhat milder climate than might be expected, although its far from tropical, even in the summer months. But it makes for wild and unpopulated beaches.

Human occupation of Skye extends back many thousands of years into the Mesolithic period, or Middle Stone Age, and includes a period of Norse rule followed by clan domination. Today the population is about 10,000, and at 640 square miles, the population density is quite low. While a short ferry ride used to be the only access, a highway bridge completed in 1995 now connects Skye to the Scottish mainland, making visiting much easier.

“…this entire cove is covered with the calcium carbonate skeletons of the coralline algae, giving it a white tropical appearance.”
— Gary Griggs

While the Isle of Skye is famous for many things, great beaches are not high on the list. But in the local language, there are a few wee gems on Skye, and the Coral Beach at Claigan is one of them. It’s combination of accessibility and white sand make it an attractive destination on a warm sunny day, if you can manage to be there on a warm sunny day. It’s easy to find once you locate the Dunvegan castle, which has been the home of Clan MacLeod since the 13th century. The castle is generally believed to have been inhabited by a single family longer than any other home in all of Scotland.

Take the narrow road north from Dunvegan, past the castle, and follow it to its end at Claigan. Roads are narrow almost everywhere in the Highlands of Scotland, and driving on the wrong side of the road and from the wrong side of the car provided me with four weeks of automotive dyslexia and nearly constant anxiety.

There is a small car park at the end of the road, a sign with an explanation of the area, and a gate, which opens to a farm track leading towards the shoreline of Loch Dunvegan. The start is not particularly promising, but be patient, watch for what the cattle have left behind, and stay on the path. The walk is about a mile or so, and you pass along some gravel and cobble beaches, a small “coral” beach, before stepping across a small stream, passing through a gap in an old stonewall, and continuing uphill along a grassy path. As you reach the top of the slope you will see the coral beach a short walk ahead.

To be clear, the beach is not strictly made of coral, which do have some temperature constraints, at least the hermatypic or reef-forming corals. They prefer water between about 68° and 90° degrees F. or 20° to 32° C. The water just doesn’t get this warm around Skye. The beach actually consists of coralline algae, which form skeletons of CaCO3, and which persist long after the little plants die. And this entire cove is covered with the calcium carbonate skeletons of the coralline algae. There are a few bits and pieces of black volcanic rock, but 95% appears to be the carbonate skeletons, giving it a white tropical appearance. This particular coralline algae is know as maerl and beds of this algae grow along the Atlantic coast from Portugal to Norway. They do need to live where light penetrates so are restricted to about the upper 100 feet. Historically the deposits of the calcium carbonate skeletons were dredged and crushed and used as an agricultural fertilizer. But on the Isle of Skye, at Coral Beach, you can just enjoy their deposits along the shoreline and imagine you are on some tropical island, except that the ocean is a bit colder.