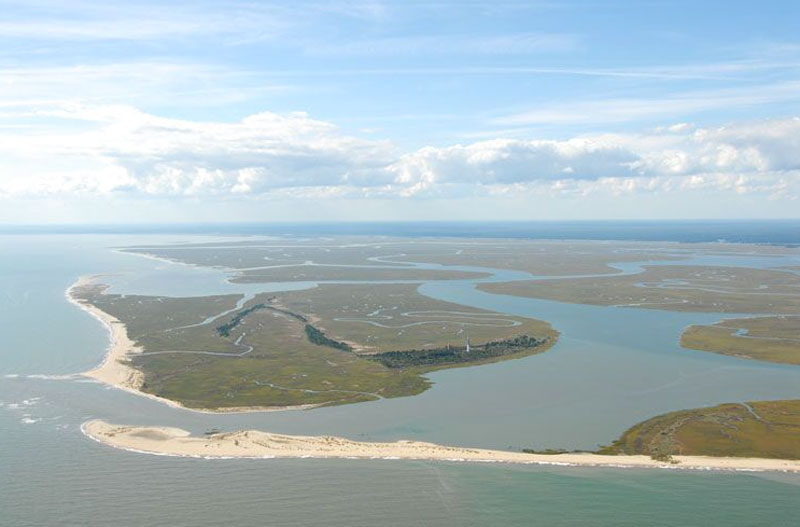 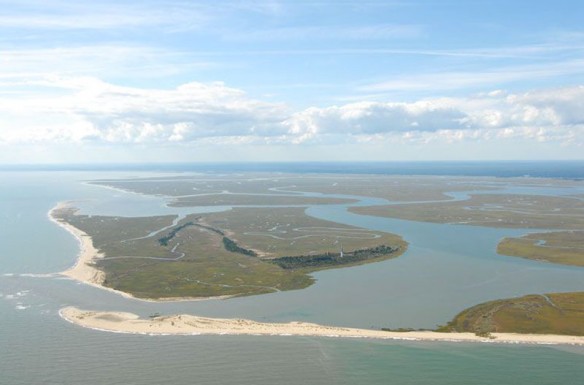 Cape Romain is South Carolina’s only cape and its most erosional coast. (1) Here is a vast estuary, with beaches miles offshore, only accessible by boat. Behind the beach is a labyrinth of islands and creeks, mostly low lying and muddy, though some have trees and abundant foliage.

Change is happening rapidly here. Shores and entrances to inlets at the edge of the open ocean are receeding. Some land has completely disappeared. The fishing chart sold at the general store looks to be over 30 years outdated. Called a cuspate foreland, the triangular formation extends 8 miles off the coast at its point. (2) Shoals extend miles offshore and keep the beaches alive, feeding them with sand.

Last year, I lived in the town of McClellanville, landward of the Cape Romain National Wildlife Refuge. Of greatest interest to me there is Cape Island, an (approximately) north-south oriented barrier island, with sand spits growing on both ends. The north-pointing spit is the largest recurved spit in South Carolina and is fairly stable, very different from the rapidly changing southern spit.

In South Carolina, the predominantly south-flowing longshore current generally creates spits pointing to the south. Here, offshore shoals refract waves and contribute to the unique north-pointing spit of Cape Island. (3) Miles O. Hayes cites “unusual shoreline orientations at the Cape” as one reason for the recurved spits prograding “in two opposite directions.” (4) The shoals, reshaped over time, are a product of the Santee River delta, north of Cape Romain. Before a dam was built in 1942, the Santee “carried to the coast one of the heaviest sediment loads of any river on the east coast.” (5)

Wind also accounts for the shape of Cape Island. According to Hayes & Michel “cuspate forelands are most common on shorelines with two opposing wind directions” because the wind generates waves from opposing directions. (6) In the winter, storms come from the north and the southern spit will likely increase. Nor’easters can move slowly over the coast with sustained power. In the summer, the southern spit of Cape Island, and the southern flank of the cape face the wind. Hurricanes can bring dramatic instances of storm surge, wind and wave actions that carve these islands.

Lighthouse Island and Raccoon Key compose the southern flank of the cape. Toward the lighthouse, the dune fields are almost totally crushed, washover is perpetual, and new inlets often form where the beach in front of tiny creeks is eaten away.

Major changes can be seen since the first 1989 satellite photograph was taken of this area. The southern spit shows its animation; accumulated sand grew over the inlet from 1989 to 1994, paralleling the beach at Lighthouse Island for the entire length of the island and blocking the inlet. By 2005, the elongated spit had broken off, opening the inlet again. By 2013, it became clear that the southern spit was forming to cover this inlet again.

Three breaches were made in Cape Island in 2011 with the hurricane event, Irene. (7) One of the breaches healed itself quickly, while the other two and the land between completely washed out to create a new inlet dividing Cape Island in half. Despite the rapid erosion at the new inlet on Cape Island, the relatively stable north end supports a diversity of plants and the southern end has active dunes and a highly dynamic accreting sand spit.

The mainland here maintains its rural nature. McClellanville is surrounded by protected habitats including the Francis Marion National Forest and Santee Coastal Reserve. Those who ventured to live on the Cape Romain islands have been few. Seewee indians occupied many creek banks, leaving behind shell middens found up and down the coast. The Lynch family, one of the founders of McClellanville, had their summer home on the Cape islands sometime after 1750. The hurricane of 1822 prompted those living at the mouth of the Santee to move inland, and the town of McClellanville was born. (8) A lumber mill operated by wind was once near the Cape Romain beach, sawing timber brought by boat from the Santee, en route to Charleston. By 1822, steam had taken over as the latest technology, which could be used on site where trees were being cut, and the sawmill was obsolete. Lighthouse keepers had a residence near the lighthouse, now gone, which they landscaped with ornamentals and fruit trees. (9)

“Cape Romain’s beaches and islands are spectacular locations to see the forces of coastal change at work. ”
— Cecelia Dailey

If we could go back a thousand years, what would this place look like? Even a couple hundred years ago, we know the marsh islands were much larger from historic accounts. Early maps show the general triangle shape, and in the 1900s, maps show the hook-like southern end of Cape Island and warn of the shoals here. (10)

Cape Romain’s marsh islands are largely silt and clay. Once suspended in water, these fine particles are moved more easily than coarse sand. (11) This is one clue to decoding the complex morphology of this area. On a mesotidal coast (as found in South Carolina), the ebb-tidal (outflowing) delta is much larger than the flood-tidal (incoming) delta deposits, another clue which accounts for the seaward shoals found at inlets. 12 miles off the coast of the active Santee delta front line “a complex of reworked deltaic deposits” which give a ghostly, perplexing impression of where islands might have been long ago.

The Santee River’s delta was once much more vast, composed of this mixture of sediment, sorted by the action of wind and waves. The Pee Dee River and several other rivers empty into Winyah Bay near Georgetown, one of the largest watersheds on the east coast (18,000 square miles and stretching to the border of Virginia). The entire Santee/Pee Dee area from the inlet at Winyah Bay to the point of Cape Romain is an approximately 18-mile stretch which is the “largest deltaic bulge on the east coast of the United States” according to Miles O. Hayes. (12)

Hayes says that Cape Romain does not conform to the general morphology of the other Carolina capes (Fear, Lookout, Hatteras) as Romain’s flanks are relatively symmetrical with significant longshore sediment transport to the north. Some of the unique factors that Hayes speculates on include: “Sheltering of the cape from the dominant northeasterly waves at the present time (to some extent) by the mass of the Santee Delta, as well as shoals offshore of the delta. The rapid retreat of the cape over the past few hundred years conceivably moved the present form further into the shadow of the delta than when it first started to develop. In early years, it may have had the morphology as the other capes, because it was more exposed. The bathymetry of the shelf off the present cape shows that complicated shoals now occupy the space where the cape was formerly located.” (13)

From the aerial images, you can trace the lines of change on some landforms. (14) Landward of the Santee are “multiple, parallel highstand beach ridges” which are bands adjacent to the delta from the late Pleistocene (2.6 million to 11,700 years ago). The Santee dissected these ridges during the “Late Wisconsin sea level lowstand” (about 18,000 years ago). At the time of the early Holocene when sea level rise began to slow to a steady rate (about 6,000 years ago), barrier islands formed in equilibrium with the forces of change, and the Santee delta likely began to resemble what we see today. The northern spit of Cape Island shows rings of growth northward of at least several hundred years. (15) In this flooded landscape, low-lying evidence is rewritten and rearranged. Dams upstream remove sediment from the waters of Santee now, but allow water flow, contributing to erosion here and down the shore. (16) This area will remain the most erosional in South Carolina, revealing the reality of sea level rise from the minuscule to the aerial view. Cape Romain’s beaches and islands are spectacular locations to see the forces of coastal change at work.