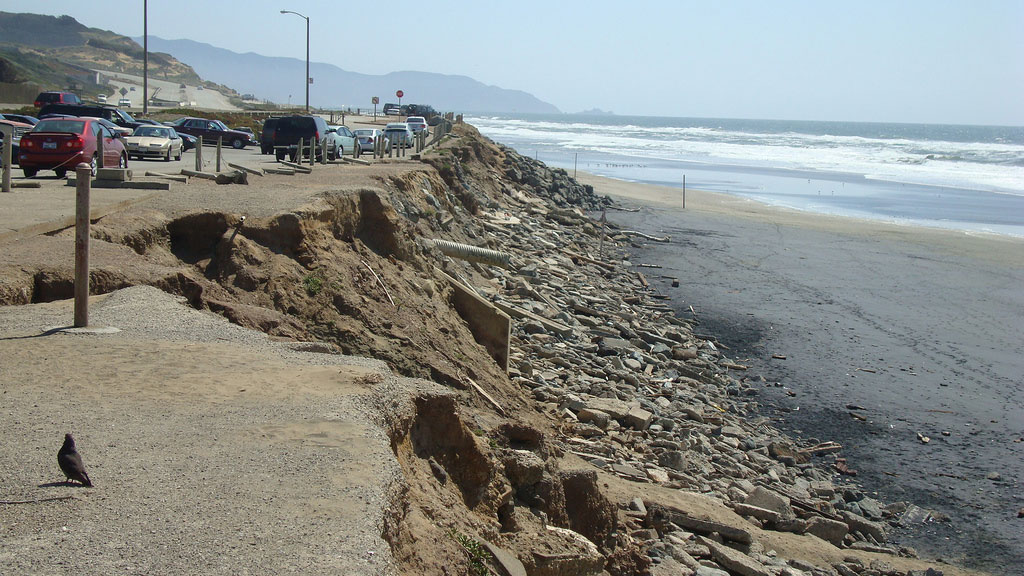 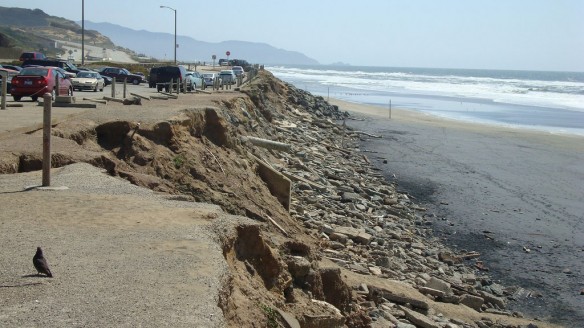 Every few years, caravans of yellow trucks move thousands of tons of sand from the north end of San Francisco’s Ocean Beach to eroded areas at the south end. And almost immediately, the silvery tide begins carrying it back to where it came from.

The sand bucket brigade is a short-term solution to a more pressing problem: 3.5-mile Ocean Beach, which lines the city’s western edge, is suffering the ravages of a warming planet — hammered by winter storms and rising sea levels that are eroding the shoreline. This week, a parking lot south of Sloat Boulevard collapsed, and a nearby underground wastewater pipeline is under threat from the encroaching surf…

San Francisco Rising to Threat of Swelling Seas, Climate Central (10-23-2014)
The City by the Bay, where bayfront shorelines will continue to experience worsening high tide flooding, where the nearby international airport is among the nation’s most vulnerable to floods, and where Pacific Ocean shoreline erosion could be accelerated by sea level rise, has adopted a first-in-the-nation approach to assessing potential infrastructure risks posed by rising seas…

Sand Mining in SF Bay Dealt Blow by State Appeals Court, SF Examiner (11-21-2015)
A California appeals court has ruled that sand in the San Francisco Bay must be considered a public trust resource, potentially challenging the practice of mining for sand in the Bay that’s in turn used in construction projects…

San Francisco Bay Sand Mining Raises Question About Beach Erosion, SF Examiner (11-15-2012)
The sediment in San Francisco Bay, once thought of as a renewable resource, is eroding and being removed much more quickly than nature replenishes it… 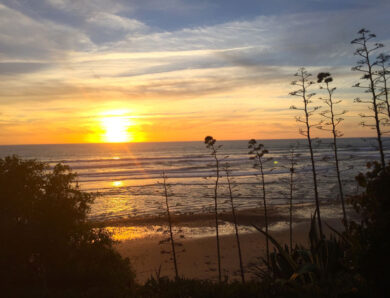